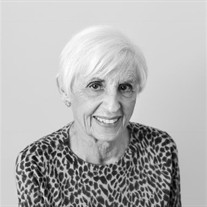 June Lily Stout 1933 - 2016 Our mother, grandmother, sister and friend June Lily Seymour Stout passed away peacefully at home on June 13th after battling cancer for the last year. June was born to William and Dorcas Seymour on June 10, 1933, in Salt Lake City. She attended South High School and met her future husband, DeMar Earl Stout, on a blind date during her senior year. They married on June 20, 1952 — her parents’ 20th anniversary and her grandparents’ 40th anniversary — in the Salt Lake Temple, and had three children, Michael, Tracie and Barry. June (“Nana”) will be remembered fondly for requiring her children to add wheat germ to their cold cereal, for her bountiful garden and pumpkin patch, for the color-coded plastic Easter eggs she filled for her grandchildren for many years (well past the time some of them should have been hunting for eggs), and for the beautiful quilts she made (and named) for each grandchild. And of course, no Christmas would be complete without her story about the Right family and the dollar-store gifts passed along with it. A lifelong member of The Church of Jesus Christ of Latter-day Saints, June served in many capacities, and will be remembered by many former Primary children for her role as “Sister Friendly.” Survived by her children, Michael (Jane), Tracie Buys (Jim), and Barry (Bonnie), her siblings Pat Miller and Bill Seymour (Pam), her ten grandchildren and six great-grandchildren. Preceded in death by her parents and husband. A graveside service will be held 10:00 a.m., Friday, June 17, 2016 at the Elysian Gardens, 1075 East 4580 South. A viewing will be held Thursday, June 16, 2016 from 6 to 8 p.m. at the Valley View Third Ward, 4101 South 1925 East, Salt Lake City, UT. The family wishes to thank hospice caregivers Becky and Alexis, who helped June during her last weeks of life. We take comfort in knowing that June has been reunited with her husband and that she may finally learn what happened to that missing bag of butterscotch morsels.

The family of June Lily Stout created this Life Tributes page to make it easy to share your memories.