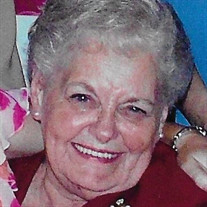 According to her birth certificate, June Elizabeth Brown Ward was born in Salt Lake City, Utah on February 10, 1930. However, if asked, she was 21 or, more recently, 34 years old. June’s childhood home was a cozy, white house near 9th South and 8th East in Salt Lake where she grew up with three sisters and two brothers. There she established happy memories of planting flowers, sledding down hills, and “walking miles and miles uphill in the snow” to get to school. After graduating from East High School, June married C.B. Ward, a handsome, young marine who was a friend of the family. June and Chuck moved to the small town of Dolores, Colorado where they shared the highs and lows of living on a ranch for a short time before moving back to Salt Lake where they bought their first home and eventually welcomed three daughters into their lives. Chuck settled into life working as a skilled auto mechanic and June earned a little pin money by babysitting and taking in sewing and ironing. When June and Chuck later divorced, she became a full-time seamstress at Beehive Clothing Mills where she worked for 28 years before retiring in 1995. She made many friends while working there. June was an avid and skilled seamstress who not only made clothes for herself and her children, but she was often sought out to sew for others. Many late nights and weekends she could be found stitching together a prom dress or pantsuit for someone. Not only did she create a goodly number of beautiful wedding dresses, she can be credited with outfitting several entire bridal parties. Her sewing machine and scissors were always busy. In addition to sewing, June enjoyed serving in many callings as a member of the Church of Jesus Christ of Latter-day Saints. She also enjoyed bowling, knitting, crocheting, collecting recipes and she read—a lot! The reading undoubtedly gave her an advantage as she worked her daily crossword puzzles with great skill and tenacity almost until the day she died. June was blessed and loved by her parents: Frederick Leon and Martha Brown (both deceased); children: Frederick Bruce Ward (deceased), Kathy (Terry) Failner, Pam Huber, Mandee (Brian) Strong; 10 grandchildren; 23 great grandchildren; 6 great-great grandchildren; sisters: Elaine Barsi (deceased), Lyle Beckstrand (deceased), Helen Syndergaard Bodily (deceased); brothers: Paul Brown, Leon “Buddy” Brown; and many nieces, nephews, and friends. A special thanks goes to Becky Sheehan of Harmony Healthcare for her nearly six years of kind and loving service. A viewing will be held on Friday, January 11, 2019 from 10-10:45 a.m. with funeral services following at 11:00, Elk Run LDS Chapel, 3610 S. 8400 W., Magna. Funeral arrangements carried out by Premier Funerals. Burial at Wasatch Lawn Memorial Park.

According to her birth certificate, June Elizabeth Brown Ward was born in Salt Lake City, Utah on February 10, 1930. However, if asked, she was 21 or, more recently, 34 years old. June&#8217;s childhood home was a cozy, white house near 9th... View Obituary & Service Information

The family of June Elizabeth Ward created this Life Tributes page to make it easy to share your memories.

According to her birth certificate, June Elizabeth Brown Ward...