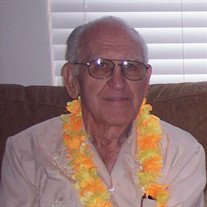 Junius Harold McEwan Our father, grandfather, great grandfather, and great-great grandfather, Junius Harold McEwan passed away peacefully on June 25, 2017 at the home of his granddaughter, April Duckworth, in West Haven, Utah. Dad was born August 14, 1924 in Provo, Utah to Junius Arthur and Dora Slack McEwan. He married his eternal companion Lois Dixon in the Salt Lake Temple on September 19, 1944. They were the parents of five children: Lynda, James, Alan, David, and Glen. Dad was a great example to his family demonstrating principles of honesty, integrity, frugality, and hard work. Gospel principles were most important and he clearly showed it in his day to day living. Camping trips, hunting and fishing adventures, ball games, and vacations will always be remembered. He served in various callings in the church and always did what he was asked. He built homes and spent his life in the Provo, Orem, Pleasant Grove, and West Haven areas. He was an excellent craftsman, building homes, apartments, boats, and campers. He was employed by U.S. Steel (Geneva Plant) most of his career as an electrician and motor inspector. He was a hard worker and retired after 42 years of service. He later spent time managing his apartments and growing wonderful fruit in his orchard. His cherries will always be remembered. Mother and dad enjoyed traveling. They traveled to many destinations within the country as well as internationally with the Holy Land being their favorite. Dad was preceded in death by his wife Lois, son and daughter-in-law, Jim and Dorcus, granddaughter Christina, and brothers Sheldon and Dean. Surviving family members include children Lynda (Ray) Morgan, Alan (Deborah) McEwan, David (Susan) McEwan, and Glen (Gloria) McEwan, brother Lynn McEwan, and many grandchildren, great grandchildren, and great-great grandchildren. He truly left a large family legacy of which he was proud. Family and friends are invited to a viewing at Premier Funeral Home 1160 North 1200 West Orem, Utah from 1:00-1:30 PM Saturday July 8 with a graveside service to follow at 2:00 PM at the Provo City Cemetery.

The family of Junius Harold McEwan created this Life Tributes page to make it easy to share your memories.