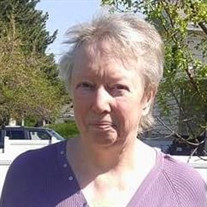 Karen Onas Petersen Bowman, 78, of Sandy, died peacefully in her home on November 13, 2021 of cancer. She was born August 21, 1943, in Albert Lea, Minnesota, to Edwin B. Petersen and Onas Eloise Farris, and was adopted & sealed to Vera Barnes Petersen in her early childhood. Surviving Karen are her three children and foster daughter: NiaMarie (Mike) Turek of Beaverton OR, Shane (Tracie) Jensen of Murray, UT, Wendelyn Jensen of Sandy, UT and Kami (Denis) Lindsay of Winston, OR. She is also survived by 8 grandchildren, 1 great grandson and 10 siblings. Karen was preceded in death by her mother Onas, older brother Lowell E. Petersen, adoptive mother Vera and her father Edwin. Karen graduated from Austin, MN high school in 1961, and then attended Weber State College in Ogden intending to get a nursing degree, but later changed her major, earning an elementary education degree in 1966. She married Vagn Harder Jensen in UT in 1965 in the Salt Lake Temple and later divorced. They had three children together, as well as taking in a foster daughter. Karen worked for over 20 years at Utah Schools for the Deaf and Blind, initially as a librarian, then became a teacher of the blind - all ages and levels. Her Braille teaching, reading, writing & transcribing were quite expert. Karen was a very generous person, willing to give and help where she could. She was always concerned with the health & well-being of others. Her younger siblings remember that she would often make up stories to tell while they were doing dishes, and had a very mothering instinct. She delighted in hosting an annual Easter egg hunt at her home for her grandchildren, nieces, nephews and grandnieces & nephews. She had a very infectious laugh. She enjoyed gardening and sharing the produce. She was proud of her Danish heritage and learned to make many Danish dishes that she loved to share. She did a lot of sewing, crocheting & knitting, gifting her finished products to many a relative. She was a very frugal person. She learned many carpentry & home improvement skills and did much of her own home remodeling. Funeral services will be held at 11:00 am on Friday November 19, 2021 at Midvale East 5th Ward, 240 Greenwood Cir, Midvale, UT 84047. Visitation will be held at 10:00 am to 10:45 am prior to the services. Interment will be at Elysian Burial Gardens Condolences can be sent to the family at www.premierfuneral.com.

Karen Onas Petersen Bowman, 78, of Sandy, died peacefully in her home on November 13, 2021 of cancer. She was born August 21, 1943, in Albert Lea, Minnesota, to Edwin B. Petersen and Onas Eloise Farris, and was adopted & sealed to Vera Barnes... View Obituary & Service Information

The family of Karen Onas Petersen Bowman created this Life Tributes page to make it easy to share your memories.