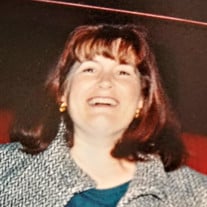 Karen Beasley Hall, 61, beloved mother, grandmother, daughter and sister, passed away peacefully from her courageous battle with cancer on Feb. 2, 2018. Born in Petersburg, VA, the daughter of Lorraine and Jesse Beasley, Karen was raised in Colonial Heights, Virginia, and graduated from high school in 1975. Karen later relocated to the Salt Lake City area with her daughter and mother, where she resided until she passed. Throughout her life, Karen continuously put the needs of others before her own. Her greatest joy in life were her four grandchildren. From their arrival into this world, she raised, loved, spoiled, and treasured her grandkids. She was a happy, sweet-spirited person who had within her a determination that saw her through many challenges in her life. This strength showed itself fully as she faced battle after battle with her fight against cancer. Those who knew her were amazed by her courage. The family would like to take this opportunity to thank the staff and administration at Fortis College, where Karen worked for several years. Their caring, support and willingness to go miles beyond what one might expect will never be forgotten by Karen’s family. Their great attitude and love made Karen believe God had put her at Fortis College for a reason. Karen is survived by her mother, Lorraine Beasley, her daughter, Bonnie Hall, her son, Jeremy Hall, her grandchildren, Justin, Dylan, Jada, and Brielle Hall, as well as her sister Jennifer Avery, and brother, Jesse Beasley. Funeral services will be held on February 10th, 2018 at 11am at the Church of Jesus Christ of Latter Day Saints at 875 Foxboro Drive, North Salt Lake City, Utah, 84054. In lieu of flowers, please donate to "Karen Hall funeral fund" Go Fund Me account.

Karen Beasley Hall, 61, beloved mother, grandmother, daughter and sister, passed away peacefully from her courageous battle with cancer on Feb. 2, 2018. Born in Petersburg, VA, the daughter of Lorraine and Jesse Beasley, Karen was raised in... View Obituary & Service Information

The family of Karen Beasley Hall created this Life Tributes page to make it easy to share your memories.