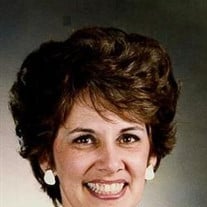 Karen Marie Richards, beloved wife of Donald LeRoy Richards, mother of 6 and stepmother of 7 more, grandmother, daughter, sister and aunt, of West Jordan, Utah, passed away on Sunday, March 29, 2015 at the Central Utah Veterans Hospital in Payson, Utah. She was born December 17, 1946 in Illinois to Phillip Johnson and Eurith Williams. She had three brothers (Norman Johnson, Terry Johnson and Steve Johnson), one half-brother (Phillip Johnson) and one half-sister (Christina Paradis). She was predeceased by both parents, and her brother Norman Johnson. She married Donald Leroy Richards, her eternal companion, in May 1988. Prior to that she was married to Larry N. Hines, with whom she had her six children. She is survived by her husband, Donald, and all of her children and step-children; Dane Hines (Samara), Veral Hines (Comfort), Tamara Apgood (Jeff), Nathan Hines (Nicole), Dorothy Chanthaminavong (Souk), Rebecca Castor (Cody), William Richards, Michael Richards (Catrina), Kathryn Beagley (James), Samuel Richards, Jonathan Richards (Anne), Paul Richards (Jordan) and Benjamin Richards (Liz); along with a whole pile of grandchildren and even great-grandchildren. She attended and graduated high school in Arizona and later graduated from Boise State University. She enjoyed genealogy, sewing, gardening, spending time with her grandkids and playing her baby grand piano that her doting husband gave her. She loved her flowers and the produce from her garden. Most of all she loved having her grandkids visit. Graveside services will be 11:00 am, Monday, April 6, 2015 at the Utah Veterans Memorial Park, 17111 South Camp Williams Road, Bluffdale, UT with a viewing prior to services at the cemeteries chapel from 10:00 to 10:30 am. We, her family, wish to express our gratitude and deepest thanks for the fantastic staff at the Central Utah Veterans Hospital who, if only for the week and a half that she was there, gave the best of care for both her and her husband, Donald.

The family of Karen Marie Richards created this Life Tributes page to make it easy to share your memories.