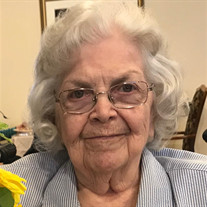 Karen Elizabeth Earl Rowen was born as Joan Corbell on June 9, 1932 in Spanish Fork, Utah to Charles Thomas and Dora Coates Corbel. Her young life was spent living in Spanish Fork UT with her two younger brothers, Charles Jr, and Jimmy. Her dad was one of Provo’s first aviators. He served on the local airport board and was the acting superintendent of the municipal airport. On January 22, 1939, a cool but clear Sunday afternoon, Charles took his wife and a student pilot for a short joy ride in his 1928 Waco biplane. During the flight, the plane stalled and crashed, killing all three on board. Nine months later, the three children, 6-year-old Karen, 4-year-old “Junior” and 2-year-old Jimmy, were adopted by a successful and generous business man, Frank J. Earl, and his wife LaVieve. This kept all three children together and gave mom another brother and sister, Frank and LaVieve’s two children, Charles and Mauree. This was a great blessing to mom throughout her life, and she loved having a sister who was the same age. As for her name change, family history relates the story that since the Earl’s already had a son named Charles, they asked Charles, Jr. if he’d like to have another name; he chose Richard. Once mom heard this, she asked if she could change her name. She chose Karen Elizabeth. Mom attended schools in Provo UT and excelled as a writer for the Provo High School’s student newspaper. While attending Provo High, she met Tom Roylance and their encounter soon blossomed into a romance. On December 20, 1951, they were married in the Manti LDS Temple. Dad had signed up for the Navy and shortly after their marriage, they moved to San Diego, CA. Their first son, Thom, was born while dad was in the Sea of Japan. While Dad was at sea, Thom spent his first few months hanging out with Mom on the beaches of Coronado, CA. Two years later, while Dad was stationed in the bay area, Bron was born in a naval hospital in Oakland, CA. Shortly after Bron arrived, mom and dad moved back to Provo so dad could finish school at BYU. Once dad graduated with his graphic design degree, the young family moved to southern, California. Soon after arriving in Burbank, Rosanne was born at St. Joseph’s Hospital. The family of five enjoyed spending many days at the beach. To help support the family, mom went to work for NBC Studios. Eventually, mom and dad separated and finally divorced in 1966. Mom continued working for NBC but eventually moved to Carnation Company in Los Angeles to work in the purchasing department. While there she met Bob Rowen, one of her teammates on the Carnation Company’s weekly bowling league. Their relationship grew closer and on November 15, 1985, they were married in Lake Tahoe, NV They had a happy life together traveling the United States. After Bob experienced a series of health issues, resulting in his being separated from Mom for over a year, it was decided to move them both to Utah where we could take better care of them. In May 2016, we moved them to the Courtyard at Jamestown in Provo. Bob passed away on December 26, 2016, Rosanne’s birthday. Mom missed Bob tremendously and she left to join him on February 21, 2018, Sean’s birthday. We are happy that they are together again. Mom leaves behind her three children, Thom Roylance (Diane), Lindon, Utah; Bron Roylance (Kari), Sundance, Utah; and Rosanne Lovato (Dwight), Boulder, Colorado, plus 5 grandchildren and 9 great-grandchildren. Other than her children, she outlasted all of her family and was preceded in death by both sets of parents, her brothers Richard, Jimmy, and Charles, as well as her sister Mauree and her husband, Bob. A graveside service was held at 2 PM Saturday, February 24, 2018 where she was laid to rest next to her husband, Bob.

The family of Karen Earl Rowen created this Life Tributes page to make it easy to share your memories.