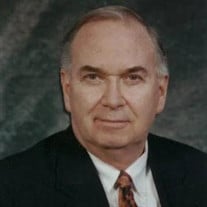 Karl Ray Kelly Nicholes, M.D. 1932 - 2016 Karl Ray Kelly Nicholes M.D., PhD passed away on September 23, 2016 due to complications following surgery. He was born May 12, 1932 in St. George Utah to Joseph Kelly and Olive Maiben Nicholes. He was the youngest of nine children. Kelly attended school in Provo, UT where he was recognized as an exceptional student of science. He went on to earn degrees at Brigham Young University, University of Utah and the University of Minnesota. Following his training, Kelly was a practicing physician for 46 years. Kelly married the love of his life, Velyn Washburn, in the Salt Lake City Temple on June 4, 1952. They adopted nine children, and their lives were centered around their family. Kelly lived a life of service. Besides serving as a beloved physician, he served his country as a flight surgeon in the U.S. Air Force. Kelly was also a devoted member of the Church of Jesus Christ of Latter Day Saints, serving faithfully in many capacities, including that of Bishop and Branch President. Kelly was preceded in death by two sons, Joseph Kelly and John Earl, two granddaughters, Brenna Lyn Bastian and Jayla Cardae White, and seven of his siblings. He is survived by his wife Velyn, seven children, Barbara Larson, Thomas Karl (Renee) Nicholes, Kirsten (Matthew) Bastian, Diana White, Olivia (Michael) Cheeney, TC (Donny) Crouch, Matthew Franklin (Janet) Nicholes, 26 grandchildren, 12 great-grandchildren and his sister Joyce Woodbury. A memorial service will be held Friday September 30, 2016 at 11 am at the Welby 3rd Ward Building located at 8385 S. 4800 W., West Jordan, Utah. Family and friends may come at 10am to visit. There will be no viewing. The interment will be at East Lawn Memorial in Provo, Utah.

The family of Karl Ray Kelly Nicholes MD created this Life Tributes page to make it easy to share your memories.