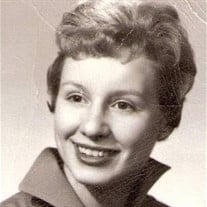 Karma Hunter Anderson May 2, 1936-May 30, 2019 Karma H. Anderson, beloved wife, mother, grandmother, great-grandmother, sister, aunt, foster mother and mentor, passed away peacefully on the morning of May 30, 2019, at the age of 83. Viewings will be held on June 7th at 6-8pm and June 8th at 10am, followed by a funeral service at 11am at the church located at 1120 North 850 West in Provo, Utah. Interment will be at Provo City Cemetery, 610 South State, Provo, Utah. Karma was born in Lehi, Utah, on May 2, 1936 to her loving parents Keith Fox and Norma Roth Hunter. She grew up in Provo where she met her husband, C. Richard “Andy” Anderson. They were married in June 1957 and spent 62 wonderful years together. She graduated from Provo High School in 1954 and earned her Bachelor of Art degree at Brigham Young University in 1957 where she also won Miss Congeniality in 1955. She earned certifications in children’s education and special education and worked as a teacher in special education for many years, specializing in training adult-sized but mentally-toddler children. She was an active and dedicated member of the Church of Jesus Christ of Latter-Day Saints all her life, serving in many leadership and service positions. Karma raised three strong men, four women who are even stronger, plus several foster and rescued children who grew up in her house. She loved all kinds of art, music and theater and was an accomplished painter and sculptor. She loved all people, especially children, and could see through many layers to the good inside anyone. She thrived on serving others and refused to consider herself when others were in need. She was also an avid animal rescuer, and her home was always filled with the noise of children and pets of all varieties. She maintained a positive attitude and environment and required everyone else to do the same. She has left her influence on countless people. She is survived by her loving husband, C. Richard Anderson, her children Teri [Merlon] Pusey, Cris [Doug] Robison, Cindee [Brady] Hanson, Keith [Kristi] Anderson, Mikol [Megan] Anderson, David Anderson, Shauna [Lonnie] Wilson, her siblings Janet [Lonnie] Hart, Paul [Kathy] Hunter, and Barbara [Brian] Anderson, 23 grandchildren, 13 great-grandchildren, and many rescued and foster children, and hundreds of people who she mentored, fought for, helped to raise, and who still call her “mom.”

Karma Hunter Anderson May 2, 1936-May 30, 2019 Karma H. Anderson, beloved wife, mother, grandmother, great-grandmother, sister, aunt, foster mother and mentor, passed away peacefully on the morning of May 30, 2019, at the age of 83. Viewings... View Obituary & Service Information

The family of Karma Hunter Anderson created this Life Tributes page to make it easy to share your memories.