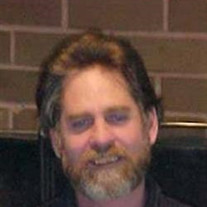 Kass Lynn Hulsey, of Ogden, Utah, passed away on January 15th, 2015 at Ogden Regional Hospital due to complications of Leukemia. Kass was born 59 years ago to Reed Hulsey (1932-1992) and Dorothy Mae Bliss in Salt Lake City, Utah on September 7th, 1955. He was the second of five children; Karen (who passed away in 1977), Kelly Hulsey, Kristy Johnson, and Kevin Hulsey. On October 7th of 1988, Kass joined Launa Lee London in marriage; the anniversary of his first year of sobriety with Alcoholics Anonymous. At age 18, he was enlisted into the United States Army as a member of the Engineer Corps. After his time in service, he became an apprentice in the Electrical Trade; first with Young Electrical Sign Company where he became a Electrical Sign Hanger. Kass then continued his education by earning his certificate as a journeyman electrician as a member of IBEW. Kass later became an Industrial Maintenance Electrician at Blue Heron Paper Company in Oregon City, Oregon. He finally moved to a fulfilling position with Western Zirconium where he spent the remainder of his career doing what he loved. During his time with his beloved family and friends, Kass was known as a woodworker, poet and artist in all medias of art. He was passionate about jazz music and was known to occasionally spend time playing the tuba, trumpet and saxiphone. He was also known by all for his “matter-of-fact” humor that could brighten the worst of days; a trait that lasted until the end. He was a resident of many places to include: Salt Lake City, Utah; Montpellier, Idaho; Green River, Wyoming; Longview, Washington; Brigham City, Utah; and finally Ogden, Utah. He also spent a few years living overseas. One of Kass’ proudest achievements in life was his active and upstanding involvement with Alcoholics Anonymous starting in 1987 and lasting 27 years, 3 months, and 8 days. Kass Hulsey is joining his sister; Karen Muehlmann, his father; Reed Hulsey, and his son Andrew Davis in the next life. He will forever be loved, missed, cherished and remembered by: Launa Lee Hulsey, his loving and patient wife; his children: Tonika Hulsey, Justin Jensen, Crystal London (Noyes), Jacey Dot Hulsey (Carter), and Kelvyn Hulsey; his two son-in-laws: Jake Noyes and Jason Carter; his grandchildren: Isaac, Ava, Trevor, Alexis, Sammy and one on the way; and the many cousins, nieces, nephews, and friends that were blessed to have such an amazing man in our lives. We are having an Open House to celebrate the life of our beloved Kass at 1:00 p.m. on Sunday the 18th of January at 1656 East 1350 South in Ogden, Utah. Our family would like to extend a heartfelt “Thank you” to the amazing members of AA for their strength and encouragement throughout Kass’ sobriety. To the doctors and nurses at Ogden Regional Medical Center, we thank you for your kind service and loving support after his sudden diagnosis days before his passing. Of the many words that we remember from an exemplary man who taught us to always kiss our loved one goodnight, we remember two things most. “Do or do not. There is no try,” a quote from Yoda in Star Wars that he would often reference. And “’A.B. C D goldfish?’ ‘L M N O goldfish.’ ‘O S M R A.B. N C M P N D C?’” a misguided way of teaching the children of the family the alphabet. A life celebration open house will be held at Hulsey’s 1pm on into the evening Sunday, January 18, 2015, 1656 East 1350 South, Ogden, Utah.

Kass Lynn Hulsey, of Ogden, Utah, passed away on January 15th, 2015 at Ogden Regional Hospital due to complications of Leukemia. Kass was born 59 years ago to Reed Hulsey (1932-1992) and Dorothy Mae Bliss in Salt Lake City, Utah on September... View Obituary & Service Information

The family of Kass Lynn Hulsey created this Life Tributes page to make it easy to share your memories.