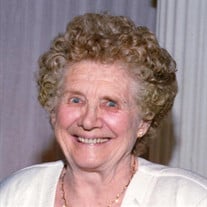 On May 21, 1928 a striking infant with curly red hair blessed the household of Andrew John and Mary Kathleen Edser Burnett. Throughout her childhood, this adventurous butterfly played amidst swaying gum trees and the laughing call of kookaburras. Too soon, Kathleen Joyce’s little world turned upside down with the unexpected death of her mother. This tragedy eventually led the heart-broken ten-year-old to a little wooden meetinghouse in the business district of Bankstown, New South Wales, Australia. Within these humble walls her prayers concerning the whereabouts of her mother were answered. Here she learned the doctrine of eternal families and the origin of man—that she was created in the image and likeness of God. The Spirit bore witness to a youthful heart and a testimony was born that never faltered. She became the first member of her family to be baptized into the Church of Jesus Christ of Latter-day Saints. Several years later, a young dairy farmer named Kay Lewis Hair prayed this young beautiful redhead to the United States. On September 25, 1953 they solemnized their love in the Salt Lake Temple, sealed for time and eternity. Her adventurous spirit led her to many distant places. She was particularly fond of oceans, as the salty mist reminded her of her blessed, faraway home. Despite the balance of her years in America, she remained true blue to her dear Australia. Kathleen Joyce’s greatest love was family. Over the years ten infants would be placed in her motherly arms and each adored with a perfect love. In time dozens of grandchildren would grace her life—sixty-one to be exact. She lived to see the births of fifty-seven great grandchildren—four on the way. Despite severe arthritis, booties were lovingly knitted for each and every one. Early February 20, 2016, the Lord relieved our little butterfly of earthly pains and cares, and today she is free to fly once again. We’ll miss her perspective and eternal optimism. Despite difficult bedridden years, she found beauty and meaning in the world around her: passing clouds, blue skies, feeding humming birds, visiting family and an occasional trip to Disney Land. All who knew “Grammy” will miss her profoundly. Five of her grandchildren currently serve fulltime missions. She is survived by her children Timothy (Terry), Anthony (Elizabeth), Kathleen Warby (LaNor), Jeffrey (Pamela), Glorianne Hamren (John), Gregory, Shannon Caldwell (Todd), Lorraine Sieverts (Jimmy), Jonathan (Mary Anne), and Kristin Gibbs (Bradley). She is also survived by her dear and only sister Marjorie Newton and preceded in death by her beloved husband, her parents and stepmother Rose Burnett. Funeral Services will be at 11:00 a.m. on Saturday, February 27, 2016 at the Poppy Lane Chapel located at 9501 S. Poppy Lane (about 9th East) in Sandy Utah. Viewing at the same location will be from 6:00 to 8:00 p.m. on Friday, February 26th and one hour prior to the services on Saturday. The family will forever be indebted to Gregory Lance for his benevolent years of selfless service as her primary care giver. His sacrifice, enabled her to live out her days in the very home she raised her little ones. In the end, she loved and trusted him completely.

On May 21, 1928 a striking infant with curly red hair blessed the household of Andrew John and Mary Kathleen Edser Burnett. Throughout her childhood, this adventurous butterfly played amidst swaying gum trees and the laughing call of kookaburras.... View Obituary & Service Information

The family of Kathleen Joyce Hair created this Life Tributes page to make it easy to share your memories.