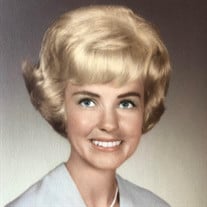 Kathryn Linda Lyon Fisher 1940 - 2019 Kathryn Linda Lyon Fisher passed away at the age of 79 on August 8, 2019 in Lindon, Utah. She was born on March 6, 1940 in Oakland, California to Leonard Joseph Lyon and Elsie Josephine Maurer. Linda spent her early childhood years in Oakland, and in 1950 her family moved to Hayward, California to a lovely home her father and grandfather built. The Lyon family was part of the growth of the Church of Jesus Christ of Latter Day Saints in the Bay Area in the years following WWII. Linda’s father lovingly called her his Fireball. If the sun was shining, Linda was outside. She was active and social and everyone loved her. At Hayward High School Linda was a cheerleader for the varsity football team. She studied ballet and dance and taught young aspiring dancers in a studio in their home. Linda attended Brigham Young University where she was a member of the BYU Folk Dancers. Linda met Merrill C. Fisher on a blind date, and on June 12, 1965 they were married in the Oakland, California Temple. They settled in Sugarhouse, Utah before moving to Pleasanton, California in 1972, where they raised their two children, Jennifer Sue and Richard Merrill. In 1996, after 24 years in Pleasanton, a job opportunity took them back to Utah where they lived their remaining years. Linda and Merrill made many life-long friends wherever they lived. Linda served in many capacities in the Church, including Young Women’s President, Ward and Stake Relief Society President, Relief Society and Primary Instructor, and temple worker. She particularly enjoyed her years as docent at the Joseph Smith Memorial Building where she loved meeting people from around the world. Linda and Merrill enjoyed travelling to beautiful places, especially Hawaii, Lake Tahoe, and Carmel, California. They loved playing tennis and golf. Linda celebrated every season in the beautiful Wasatch Mountains, and was outside hiking or walking every chance she got. Linda’s capacity to love others was unmatched, and she was loved in return. Linda was Merrill’s devoted caregiver following a stroke in 2007 that left him partially paralyzed, and she rarely left his side until his death. Their love and devotion to each other was an inspiration to all who knew them. Linda was preceded in death by her husband Merrill on March 13, 2018, and her daughter Jennifer on April 6, 2017. She is survived by her son Richard, her grandchildren, Emery Matuska and Isaac Bartlett, great grandson Elliot Matuska, sister Suzanne Judd (James), brother L. Michael Lyon (Susan), and many loving nieces, nephews, cousins, and friends. A viewing will be held on Saturday morning, August 24, from 9:00 to 10:30 at the Cottonwood 4th Ward, 5565 S. Neighbor Lane, Holladay, UT, followed by a graveside service at 11:00 at the Memorial Holladay Cemetery, 4900 S. Memory Lane, Holladay, UT. The family would like to thank Linda’s nephew and niece, Jon and Christi Judd of American Fork, and dear friend Debbie Larsen of Holladay, for the past 4 years of their devoted, dedicated, and loving service, as well as the other angels in her life who have made such a difference.

The family of Kathryn Linda Lyon Fisher created this Life Tributes page to make it easy to share your memories.