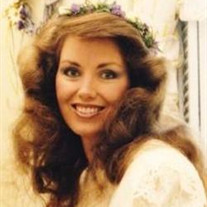 Kathy Tiller Pruden lay down to take a nap on the afternoon of August 25th, and woke up a few hours later in Heaven! Her 15 plus years of multiple health struggles were over. As much as her family on earth will miss her, we are thrilled to think of her free from her tired mortal body and joyfully reunited with her mom, dad and so many other beloved relatives who have passed. Kathy was born on January 3, 1959 to Earl and Louise Tiller. She was an exceptionally beautiful baby with lots black curly hair. She had 4 older siblings to spoil her and only had to put up with one younger brother who came much later. Kathy was a cherished daughter, mother, sister and friend. Kathy loved her children Joshua and Alizah so much! They were her life. She loved animals though, almost as much as her children and passed that love on to her children. Kathy loved wild flowers, gardens and all things antique. She had a flair for decorating and made many beautiful creations from dried flowers. Kathy was so much fun to be around. She could do great imitations to make us laugh. She loved to serve and blessed many people with her nursing skills and crafty creations. Kathy graduated from Skyline High School where she had a great group of friends. She graduated from Utah State University as an RN. During her college years she worked at Coulter Bay in the Tetons, and went back later to work as a nurse in Jackson Hole. She served a health mission for the LDS church in the Philippines. She worked with refugees and met lifelong friends there. Her mission was especially blessed! Through many miracles, she was able to bring a baby boy (Jason Call) home to be adopted by her sister. After returning from her mission she was privileged to meet and marry Glenn Scott Pruden on 5/22/1987. They were sealed in the Salt Lake Temple and married for many good years before divorcing. Kathy is survived by her dear children; Joshua Glenn Pruden, Alizah Kathleen Pruden (Zachary Browning),sisters; Christine (Sam) Balderas, Wendy (Jeff) Gregerson, Marilyn (Richard) Call. brothers; Terry (Dee) Tiller, Mark (Suzette) Tiller, numerous nieces, nephews, and cousins who will miss her greatly. She was preceded in death by her parents, nieces Ashley Ann Call, and Camille Call- Garcia. Funeral Services will be 1:00 pm on Monday, August 31, 2015 at the East Millcreek 7th Ward building, 3408 Celeste Way, SLC, Utah 84109. Viewing will be from 11:00 a.m.to 12:45 p.m. on Monday at the same location. Burial will follow the services at Wasatch Lawn Memorial Park.

Kathy Tiller Pruden lay down to take a nap on the afternoon of August 25th, and woke up a few hours later in Heaven! Her 15 plus years of multiple health struggles were over. As much as her family on earth will miss her, we are thrilled to think... View Obituary & Service Information

The family of Kathy Tiller Pruden created this Life Tributes page to make it easy to share your memories.

Kathy Tiller Pruden lay down to take a nap on the afternoon of...