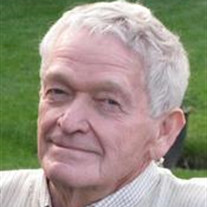 “A Life of Adventure” Kay LeRoy Ruggles, beloved son, husband, father, grandfather, great-grandfather, brother and friend, passed away peacefully at St. Mark’s Hospital on Wednesday, May 16, 2012, surrounded by his family, just weeks shy of his 80th birthday. Born June 5, 1932 to Virgil LeRoy Ruggles and Emma Lucille Cazier in Pocatello, Idaho. He married Beverly Jane Dallimore on September 20, 1952—later solemnized in the Salt Lake L.D.S. Temple on January 12, 1966. They were to celebrate their 60th wedding anniversary this September. He graduated from South High School, Class of 1949 on his 17th birthday. He graduated from the University of Utah in 1953 with a BS in Industrial Design. Following graduation, Kay was commissioned as an ensign to the U.S. Navy on his 21st birthday and then later served as a Lt. Jg USN Gunnery Officer (destroyer). He was deservedly proud of his military service and veteran status. He was a High Priest in the Church of Jesus Christ of Latter Day Saints and served in various callings, but he especially enjoyed being ward activities director where he was revered for his creative, elaborate displays and signature decorating style. He was also adept at designing and decorating floats for the Pioneer Day Parades. Kay was a pioneer, inventor and entrepreneur throughout his long and successful career and won many awards and honors. He held numerous patents and designed and developed over 100 products in a wide range of industries, including automobile, space, furniture, window coverings, amusement park and musical instruments, to name only a few. His unique designing style defied labeling and categorizing. He would simply say, “I make things happen.” He was project engineer of the first fiberglass Corvette bodies at Molded Fiberglass, Ohio; partner of Hydroswift Boats; design engineer of Minuteman missiles at Hercules and Thiokol; partner of Associated Design Company (later a division of American Standard), designing and installing fiberglass lavatories for Air Force One (Nixon); owner of Product Group, designing furniture and other products for national companies; designed and built cellular blind machines and set up the Salt Lake factory for LouverDrape (later acquired by Levolor); designed, built and installed cellular machines for a Taiwanese company; developed products for Hunter Douglas; and developed amusement attractions as a co-owner of Design Works, Inc. and was the “brainchild” of translucent tubular waterslides, operating under the name of Hydrotube. It was said of him that he was “a Renaissance man and a genius in the area of product design and materials research, with the savvy to figure out how to build almost anything.” Kay was never one to dwell on past achievements, but was truly in his element when another product was being born. He would say his favorite project was “the next one, of course.” He literally worked and was involved with new ideas and projects up until his final breath. His family takes great pride in his legacy and many accomplishments that came from his prolific, innovative mind and seemingly endless supply of energy and creativity. His home office will now be an eerily quiet and lonely place. Kay loved to be with his ever-growing family and especially enjoyed good food (he was a connoisseur), lively conversation and a good laugh. He was a great storyteller and loved to share his life experiences, including many anecdotes from his Navy years and self-described rebellious younger days. He had a multitude of interests, but held a special place for cars, architecture and graphic design. He enjoyed good music and movies. He and his wife, Beverly, enjoyed cheering for the Utah Jazz while watching the games together on television. He traveled widely with his wife and loved Europe, particularly Switzerland. He visited all 50 states. He had a very large and eclectic pen collection that he amassed from his many travels, as well as gifts from family and friends. He was a lifelong learner and a voracious reader, especially enjoying biographies, history and politics. Kay was fiercely independent and truly was a “Renaissance Man”, even designing and building his own casket. He loved his family and took great pride in their accomplishments. He gave his grateful family a special gift, just days before he passed away, when he presented each of them with his oral life history, titled “80 Years of Adventure” which he had been recording over the previous weeks. Thanks, dad—we love you dearly and will miss you! Your passing leaves a tremendous void in our family, but we look forward with great joy and anticipation to our certain and eventual reunion. Preceded in death by his parents; two brothers, Paul and Lynn; his son, Mark; and grandchildren, Christopher, Stephanie and Michael. Survived by his wife, Beverly; brother, David (Betsy), children, Cary (Patsy), Nancy (Kevin), Carolyn (Mark), Bryan (Suzie), Lisa (Darrin) Bret, 22 grandchildren, 13 great-grandchildren, and many nieces and nephews. A celebration of Kay’s life will be held on Tuesday, May 22 at the East Millcreek 4th Ward, 3103 East Craig Drive (3600 South) at 11 a.m. Friends and family are invited to a viewing on Monday evening, 6:00-8:00 p.m. at the same location and from 9:30-10:45 a.m. on Tuesday, prior to services. Interment at Wasatch Lawn.

The family of Kay Leroy Ruggles created this Life Tributes page to make it easy to share your memories.