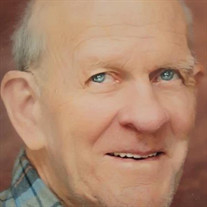 Kenneth Osborne Edwards (Kenny) (August 11, 1938 - June 12, 2020) Husband, father, uncle, grandfather, and great grandfather Kenneth O. Edwards, 81, died June 12, 2020, at Apple Village in Layton, Utah. Ken was born August 11, 1938 in Cedar City, Utah to George Osborne Edwards and Erva Simkins Edwards. Ken was raised and educated in Panaca, NV. He grew up loving life on the farm, milking cows, raising pigs, rabbits and chickens, climbing hills with his friends, and getting into mischief. Ken married his sweetheart Talma Polk on February 1, 1958 and spent the next 62 years of married life in Las Vegas working and helping raise their family of 4, 1 son and 3 daughters. After moving to Las Vegas he was a member of the Las Vegas Fire Department. Ken was successful in television repair and service business for many years and was known for his peanut brittle and caramel candy. He would frequently take his candy to the Edwards annual family reunion and to church on Sunday and share it with the youth that he taught in Sunday School. He would often take his Sunday School class as well as missionary’s out to see his cows and chickens he had in Las Vegas, always tying in some gospel principle. He served as a stake missionary, scout leader, counselor in the Bishopric, Sunday School teacher and he and his wife were Las Vegas Temple ordinance workers. Survived by wife Talma, son Terrell (Elaine) Edwards, daughters, Andrea (Bret) Edwards-Ellis, Danille (Steve) Cox, Elise (Tony) Stark. They have 12 grandchildren, 9 great grandchildren, and 6 bonus grandchildren and 8 bonus great grandchildren. Preceded in death by parents, his sister Geraldine and his brother Kie. Save some caramels for us.

The family of Kenneth Osborne Edwards created this Life Tributes page to make it easy to share your memories.