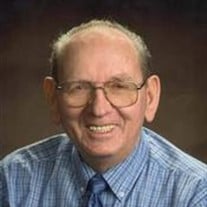 Kenneth H. Lambson, born April 27, 1928 in Union, Utah (now Midvale), died on October 4, 2013 at the Utah State Veterans Nursing home in Salt Lake City, where he was cared for by amazing and compassionate caregivers, after a long battle with Alzheimer’s disease. Ken was a fascinating, highly intelligent, self -made man. A product of what has been called "The Greatest Generation," Ken made his unforgettable mark professionally, through his devotion to family, and spiritually. After beginning as an entry-level draftsman at Boeing in Seattle, Ken grew to become a brilliant and versatile mechanical engineer, designer, and inventor, including major contributions to space suit design. He was often called upon to solve the most difficult mechanical design problems for his employers, without a lot of fanfare. He was most at home professionally behind an old-fashioned drafting board with T-square, triangles and a massive supply of pencils and erasers, solving the “impossible design missions” that others were not quite up to. When not working long and productive hours, Ken was a spirited and talented pianist (in spite of losing the ends of his fingers in a factory accident at age 15) and a huge BYU and Utah Jazz fan. Ken was a tender-hearted man, often reaching out to the down-and-out who had no place to go for Christmas or Thanksgiving, and investing countless hours of his own time to help people he had never met in faraway lands, to get a needed wheelchair or to try to immigrate legally to the United States. But Ken’s greatest legacy will be as a devoted family man, husband for over 62 years to Betty Jean Gordon Lambson, who survives him, father to his 5 children Alan, Michael, Steven, Pamela (with whom he is now reunited), and Chris, and grandfather and great grandfather to many more. A lifelong member of the Church of Jesus Christ of Latter-day Saints, Ken was never a distant patriarch, but a man who taught, worked, talked for long hours, played and sang, and loved life with every child, grandchild and great-grandchild. Ken’s life was one of devotion, unconditional love, hard work, and belief in God. His influence is far-reaching in many positive ways, and future generations will know much about him, if only for the reason that some of his posterity can spin a story almost as well as he could. Dad, grandpa, and dear husband, you will be missed, but never forgotten. Until we all come together again... Funeral services will be held on Tuesday, October 8th at 11:00 a.m. at the Midvalley Sixth Ward chapel at 8050 S. 1100 E., Midvale. The funeral will be preceded by a viewing beginning at 9:30 a.m. and followed by interment at the Orem City Cemetery at 2:30 p.m. .

Kenneth H. Lambson, born April 27, 1928 in Union, Utah (now Midvale), died on October 4, 2013 at the Utah State Veterans Nursing home in Salt Lake City, where he was cared for by amazing and compassionate caregivers, after a long battle with... View Obituary & Service Information

The family of Kenneth H. Lambson created this Life Tributes page to make it easy to share your memories.