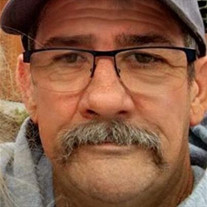 In loving memory of Kenneth Albert LeCoure Jr., age 62, passed away September 20, 2017, after long battles with illness and terminal cancer. He is survived by life partner, Zae Lynn Anderson, daughter Maegan Anderson, mother Beverly Johnson, sisters Kim LeCoure, Tammy North (Roland), and Lucretia Matteson (Rob), brothers Tim Priestley and Shawn LeCoure (Lynn), Father Kenneth LeCoure Sr. (Judy), and many nieces, nephews, and other close family. He is preceded in death by Brother Brigham Preistley and Nephew Angel Monahan. He was born May 8th 1955 in Butte Montana, later moving with his family to Salt Lake City, Utah. Kenneth had graduated from East High in Salt Lake City in 1973, after which joining the army to proudly serve his country. After an honorable discharge, he returned to Utah to pursue studying as a respiratory therapist. He worked eagerly as a respiratory therapist for many years, providing his services to many different hospitals and healthcare institutions. Later, Ken went down a different career path where he worked throughout Montana and Louisiana, as a Seismographer, logger, construction worker, and finished out working at one of his favorite places, Costco, as a maintenance man. Ken could find joy in any part of his day by being outside. He loved to camp, 4-wheel, fly fish, ski, and pretty much any outdoor activity he could find. He was a sports fan that greatly supported the Pittsburg Steelers, and the University of Utah Utes. Most importantly though, he thrived when around those he loved. His family always came first to him, and his heart grew bigger as his love grew for those around him. Ken will be greatly missed by the many different lives he impacted and will be remembered as the compassionate and selfless brother, son, uncle, friend and partner he was. There will be a private family celebration of life that will be held at a later date.

The family of Kenneth Albert LeCoure Jr created this Life Tributes page to make it easy to share your memories.