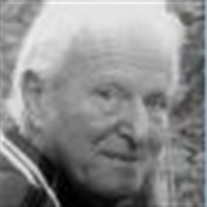 Kenneth W. McCarty “Mac” September 17, 1940 - January 17, 2018 Ken was born in Bingham Canyon, UT to Raymond & Virginia McCarty. Ken was raised in his beloved Lark, UT until his mother’s passing. At age 16 he met the 14 year old girl that he later married and they spent 59 years together. He was very proud of his children, Lynette (Charlie) Clark, Michael (Cyndi) and Brenda McCarty. He taught his children and grandchildren by example how to be a good and honorable person, serving as a father figure to three of his grandsons. Ken served his country in the US Navy aboard the USS Midway. He worked and retired from Kennecott Copper at the Arthur and Magna Concentrators. He completed a four year apprenticeship program at Salt Lake Community College and became the best Journeyman carpenter & furniture craftsman ever. He loved fishing and camping, especially in Escalante, UT. He had a natural ability playing sports, softball, bowling, and then golf at the Copper Club and St. George where he got a hole-in-one, and Star Valley, WY where he won the longest drive w/264 yards. He loved watching the Jazz & playing Knock Poker with Vickie. Ken & Betty were on the originating board of Bonnet Ball Girls Softball League and he coached for 7 years. He was a member of the Dixie Elks Lodge for over 20 years. Ken & Betty spent their retirement in St. George & Star Valley. He was loved by many family & friends and his passing is heartbreaking to everyone who knew him. He is survived by his wife & best friend Betty, children, 6 grandchildren, 7 great grands, brother William (Dot), sisters-in-law Dawna Lanier, Doris McCarty, & chosen brothers Don Gates and Bill Herrmann. Preceded in death by baby daughter Becky, dad, mom, & brother Raymond. Thank you so much nurse Becky, we couldn’t have done it without you. Graveside Military service January 27, 12:00pm @ Larkin Sunset Gardens 1950 E. 10600 So. Celebration of Ken’s Life & lunch will follow at 1:00pm @ Draper Day Barn, 1166 E. Pioneer Rd (12400 S) Graveside service under the direction of Premier Funeral services It’s too hard to say goodbye my love, you were our rock, so we’ll just see you later.

The family of Kenneth W. McCarty created this Life Tributes page to make it easy to share your memories.