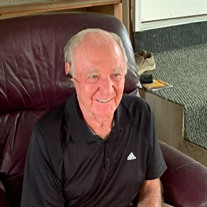 So long Folks! I have passed away at the age of 84 on May 3, 2002 I was born on June 16, 1937 in Ogden, Utah. I graduated from Ogden High School in 1956. I attended 2 years at Weber State. I married Bettsie Lee Williams in September 1959, we later divorced in 1968. We had two children Scott Lee Varney and Kris K Varney. I have 10 grandchildren, and 14 great grandchildren. I worked at Skaggs Drug Center, Thiokol, and Hill Air Force Base. I was also in the United States Army, Navy and Air Force. I was in the ART program at HAFB, 508th TFG, 419th TFG, 349th MIL, Air lift Command. I was the Com Nay Shop Chief, the Avionics Section Chief, and the Component Repair SQ, Superintendent, and attained the rank of Chief Master Sargent. I retired in June 1994. I have been around the world, South East Asia, Japan, Philippines, Korea, Europe, Australia, New Zealand, Hawaii and Alaska. I spent winters in Rocky PT Mexico, San Filepe Mexico, and Yuma Az. I am survived by my son’s; Scott Lee (Sunny) Varney, and Kris K (Christi) Varney, grandchildren and great grandchildren. To those people who were my friends, it was great. To those who weren’t, I guess we just didn’t try hard enough. AND…. “I DID IT MY WAY” A Celebration of my life will be held Thursday May 12, 2022 at the VFW, 907 W 12th street Ogden, Ut from 5pm- 9pm. There will be food and drinks. The family would like to express their gratitude to Applegate Hospice and Dr Mark Firth. Condolences can be sent to the family at www.premierfuneral.com

The family of Kenneth Varney created this Life Tributes page to make it easy to share your memories.