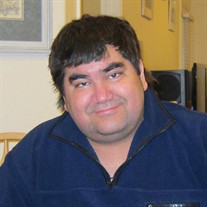 Kenneth Carl Whiting, died unexpectedly after a brief illness on July 16, 2020 in Provo, Utah. Ken was born on March 12, 1962 in Lansing, Michigan to his surviving parents Gordon and Barbara Whiting. He lived a remarkable life, worthy of celebration and remembrance. Ken had high functioning autism at a time when few knew what autism was or how to navigate it, and it was a major part of his life. It created a myriad of challenges for him that he managed with great courage and strength, but it was also an integral part of him and of making him the wonderful, eccentric, kind, loving, and generous person that he was. Ken had a rare combination of frugality and generosity. Over many decades, he was a hard-working, dependable employee, and though he never took home large paychecks, he always prepared for the future and became financially independent. His crowning financial victory, at which he never ceased to chuckle, was the day he paid off the mortgage on his own condo and finally “stuck it to the bank!” Ken was a faithful contributor to his church, and generously supported local charities to help the homeless and the poor. Though he refused to part with his 30+ year old, run down couch, he considered himself the luckiest person in the world and found great joy in his few possessions while always looking for ways to help others. Ken possessed a remarkable memory for facts and figures of all varieties: fascinating, important, absurd and mundane! In an age before the Internet, he served for family and friends as a sort of personal Wikipedia. If you needed to know what day was Constitution Day in Norway, Ken could inform you without effort that it’s May 17. If you have forgotten or never knew, Ken could remind you that Harrison was the ninth president, between Van Buren and Tyler, and that he only served a record short 31 days in office. Whatever the topic, in those days where one couldn’t simply Google the answer, asking Ken was just as effective. More recently, he was known to regularly beat Apple’s “Siri” to the punch when it came to queries of all varieties. He was a great lover of cinema. In the days before streaming services and on demand, Ken’s love of movies led him to one of the few financial indulgences he allowed himself of collecting videos. Over the years he developed a vast and carefully curated collection of movie titles that he loved to share and enjoy together with family and friends. He joyed in hosting movie nights, in serving as master of ceremonies, and in choosing or providing viewing recommendations. Movie nights with Ken might feature high-brow work from the likes of Orson Wells, Ingmar Bergman, or Akira Kurosawa, but could just as easily feature the silly or absurd films of John Cleese, Terry Gilliam, or Chuck Jones. His tastes were eclectic and broad, but more than anything he joyed in exposing a friend or family member to something new. He will be sorely missed by his parents, siblings, cousins, nephews, nieces and friends. Memorial services are by invitation only for the safety of Ken’s surviving family members. We appreciate your understanding. In lieu of flowers we ask that those wishing to express their condolences make a donation in his name to one of Ken’s favorite charities: the Community Action Services and Food Bank (https://communityactionprovo.org)

Kenneth Carl Whiting, died unexpectedly after a brief illness on July 16, 2020 in Provo, Utah. Ken was born on March 12, 1962 in Lansing, Michigan to his surviving parents Gordon and Barbara Whiting. He lived a remarkable life, worthy of celebration... View Obituary & Service Information

The family of Kenneth Carl Whiting created this Life Tributes page to make it easy to share your memories.