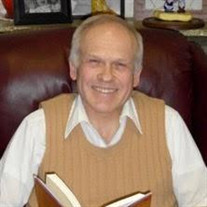 Kent Jackson Fetzer 1954 - 2017 Kent Jackson Fetzer passed away peacefully at the age of 62 on Thursday April 13, 2017 after a valiant battle with ALS. He was born to Henry Peter Fetzer and Florence Jackson Fetzer on August 22, 1954. He graduated magna cum laude with a degree in mechanical engineering from the University of Utah. Kent was married to Julia Anne Cooper on September 9, 1977 in the Salt Lake City Temple. Kent enjoyed his profession doing research and design, spending the majority of his career employed with Easton Technical Products. His motivation to do things properly and his attention to detail made him a valuable asset. He had a passion for learning and always looked for opportunities to pursue self-betterment. He was EMT certified, scuba-diving certified, and earned his Eagle Scout. Kent had a wide variety of interests including reading books, listening to music, watching films, writing (including novels and articles), and spending time in the outdoors. He enjoyed camping, hiking in the mountains, and swimming in the ocean with his family. He is survived by his wife Julia, many brothers and sisters, his children Will (Lanie), Ben (Caty), Jake (Anna), Sam (Tonya), Jon (Tatiana), Rebecca (Greg), Elizabeth (Kirk), Nathan, Landon, Megan, and Quinn, along with 22 grandchildren. He was genuine, compassionate, and was very dedicated to fulfilling his responsibilities as a citizen, in protecting the environment, and as father of his children. He had enthusiasm for life, a good sense of humor, taught his children to balance their pursuits in life, and loved his family. He will be greatly missed. Funeral services will be held 11:00 am, Tuesday, April 18, 2017 at the Salt Lake 10th Ward, 420 South 800 East, Salt Lake City, Utah where a viewing will be held Monday, April 17, 2017 from 6:00 to 8:00 pm and Tuesday prior to services from 9:45 to 10:45 am. Interment in the Salt Lake City Cemetery.

The family of Kent Jackson Fetzer created this Life Tributes page to make it easy to share your memories.