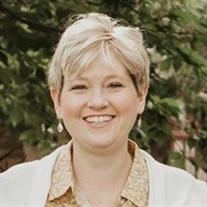 Kristin Plumb Tenney was born on November 16, 1981, in Salt Lake City, and she passed away on May 27, 2021, at her home in West Jordan. She lived a full life in between, one that was marked by ideas and ideals, creativity and beauty. Kristin’s earliest years were spent living in Taylorsville, West Jordan, and Mesa, Arizona. When she was 10, her family bought a home on Ridgemark Drive in Sandy, and Kristin loved living there. Her childhood was happy, filled with friends, family dinners, books, beloved pets, and regular vacations to Disneyland and Lake Powell. Kristin graduated from Jordan High School in 2000. She barely missed out on being named class valedictorian, though she always insisted that she was robbed. Kristin then attended BYU, graduating in 2004 with a degree in art history. Kristin loved art history. It allowed her to both think and feel deeply about beautiful things. During her time at BYU, Kristin worked at BYU’s Museum of Art, relishing the chance to take close friends and family on secret tours of the basement, showing them rarely seen paintings and the museum’s headless statute of Brigham Young. While at BYU, Kristin met and fell in love with Ryan Tenney, and they were married in the Jordan River Temple in August 2003. They have been happily married ever since, each still regarding the other as their closest and best friend. Ryan loved and supported Kristin to the end, and she loved him just as much too. On occasion, she even let him win an argument. Kristin and Ryan have two sons—Peter, born in 2007, and Frederick (Freddy), born in 2013. Kristin had planned on pursuing graduate studies and then a career, but when her children were born, she decided to stay home and raise them first. She pursued motherhood with the same mixture of creativity, passion, and joy that marked everything else that she did. She loved her boys enormously, thought about them constantly, and was incredibly proud of the young men that each has already become. Kristin had an array of talents. She painted and she drew. She was a self-taught graphic designer, selling customized invitations online for years. She was tech-savvy and a whiz with Photoshop. She fixed sprinklers. She worked at a concrete batch plant as a teenager, and she could capably operate heavy equipment. She once remodeled an unfinished basement room by herself, just to prove to everyone that she could. There was almost nothing she couldn’t figure out how to do—particularly if someone told her that they thought she couldn’t. Kristin’s personality traits and interests were likewise diverse. She had a wry sense of humor and laughed easily. She was a thoughtful gift-giver. Sometimes she was the life of the party, but sometimes she preferred commenting from the corner. She was equally happy reading Jane Austen or watching the Simpsons. She lived for Diet Coke, McDonald’s breakfast, Cafe Rio, and Olive Garden. She listened to the Cure and the Smiths and New Order. She had a thing for Converse All-Stars. She could spend days in craft stores. She named her childhood cat after a Christmas ornament, a more recent cat after a Marvel superhero, and the family’s pandemic cat after L.M. Montgomery. Kristin cared deeply about the world around her. The world’s injustices and inequalities bothered her greatly, and in any situation (big or small), she sympathized with those who were hurting or were the underdog. She passionately supported women’s rights and other social causes. She wanted so badly for the world to become a kinder and fairer place. In 2017, Kristin was diagnosed with late-stage ovarian cancer, and she endured endless surgeries and rounds of chemotherapy in the ensuing years. She kept fighting long after she could justifiably have given up, and she did so because she wanted to stay with her boys for as long as possible. Kristin used to recoil at well-meaning suggestions that there were any hidden blessings or divine purposes for all this. She rightly viewed her cancer as a tragedy. But as Kristin understood better than most, great art sometimes comes from great tragedy. And in the midst of this one, Kristin painted a masterpiece, teaching us all almost unfathomable lessons about determination, perseverance, grace, and love. Kristin is survived by her husband Ryan and their children Peter and Freddy, her parents Kenneth and Kathy Plumb, and others from her extended family. She is also survived by the many friends who laughed with her and helped bear her burdens, thereby becoming her family too. Kristin’s family gives its deepest thanks to all who helped in the last few years. From neighbors to doctors, employers and co-workers to friends, so many have helped so much and in so many ways. In lieu of flowers, the family would suggest a donation in Kristin’s name to any organization that helps those who are hurting. If Kristin were here, we suspect that she would recommend Primary Children’s Hospital, or a cancer research organization, or perhaps a homeless shelter. Kristin might also suggest doing something to make your home a touch more colorful—an accent wall or a new painting would do. A public viewing will be held on Friday, June 4, 2021, from 6 to 8 p.m., and the funeral will be held on Saturday, June 5, 2021, at 11 a.m. Both services will be held at the LDS Church on 8834 S. Duck Ridge Way, West Jordan UT 84081. After the funeral, graveside services will be held at Memorial Redwood Cemetery, 6500 S. Redwood Road, Taylorsville UT 84123. At Kristin’s request, and out of concern for the vulnerable still among us, please wear a mask during the funeral. In the words of a dear friend, Kristin “was brilliant, creative, sometimes exasperatingly stubborn, and incredibly capable. Kristin loved her people fiercely and thoughtfully.” Those of us who knew Kristin couldn’t help but love her back with equal force, and we’ll miss her terribly until that future day when we can be with her again. We can’t wait for that day to come.

Kristin Plumb Tenney was born on November 16, 1981, in Salt Lake City, and she passed away on May 27, 2021, at her home in West Jordan. She lived a full life in between, one that was marked by ideas and ideals, creativity and beauty. Kristin&#8217;s... View Obituary & Service Information

The family of Kristin Plumb Tenney created this Life Tributes page to make it easy to share your memories.