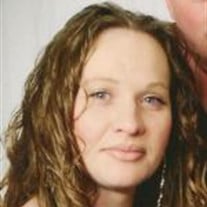 On Friday Sept. 24th our sweet Kristy lost her battle with addiction and returned to our loving Heavenly Father. She was born January 23, 1981 in Provo. Utah. She grew up and went to school in Spanish Fork and Provo. Kristy had such a fun loving and spunky personality. She was a loving wife, mother, daughter, sister and friend. She loved to spend time outdoors, especially with family and friends. Her heart was so full of love for everyone around her and she was never afraid to tell you how she felt. Kristy had a great sense of humor and loved to laugh. Kristy married Jesse Chapman in October 2006 and they lived in Washington, Utah. Jesse was the best husband and father Kristy could ever ask for. She loved him dearly and was so grateful to have him in her and her son Junior's life. They had two beautiful children together, Jessica (4yrs) and Jonathan (3months). She loved her little family so much and was so happy to be a wife and mother. Kristy was preceded in death by her mother, Valerie (Bruce) Norton, brother, Cody Corbett, grandmother, Doris Peay, grandfathers Donald Peay and Bryce Corbett, and mother-inlaw, Sue Chapman. Kristy is survived by her husband Jesse Chapman, sons, Junior and Jonathan Chapman, daughter, Jessica Chapman, father, Kendall Corbett, sisters Angie (Jason) Harward, Kandie (Dan) Shelley, father-in-law, Donald Chapman, sister-in-law, Mary (Susie) Phillips, brother-inlaw, Mike Chapman and last but not least her grandmother, Beverly Corbett. She is also survived by many aunts, uncles, nieces, nephews, and friends that will miss her always. The family wishes to thank all those that have been involved in helping Kristy fight all these years, we could not have done it alone. Thank You. Kristy we know you are finally at peace and we will miss you more than you know .....until we meet again. Funeral services held on Friday October 151 at 11:00 a.m. with viewing 1 hour prior to service at the 2nd Ward church located at 98 South Main in Spanish Fork . Family and friends may also pay their respects on Thursday September 30th from 6 p.m.- 8 p.rn also at the church. Kristy will be placed to rest in the Spanish Fork City cemetery. In lieu of donations a fund has been set up in Kristy's name at any Zion's bank location to help with funeral expenses.

On Friday Sept. 24th our sweet Kristy lost her battle with addiction and returned to our loving Heavenly Father. She was born January 23, 1981 in Provo. Utah. She grew up and went to school in Spanish Fork and Provo. Kristy had such a fun... View Obituary & Service Information

The family of Kristy Corbett Chapman created this Life Tributes page to make it easy to share your memories.

On Friday Sept. 24th our sweet Kristy lost her battle with addiction...