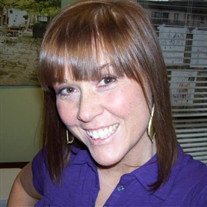 Kristy Lynette Jorgensen Cousins 1979 – 2017 Kristy Lynette Jorgensen Cousins returned to her loving Heavenly Father after a 9 year battle with BRCA1 triple negative breast cancer on Friday, April 7, 2017. Kristy was born in Brigham City, Utah on August 16, 1979 to Craig S. Jorgensen and Ada Marie Florence Jorgensen. She graduated from Box Elder High School, attended Southern Utah University and graduated with a Bachelor of Arts in Public Relations from Weber State University. She married Randall Cousins on March 31, 2015 in the Salt Lake Temple. Kristy was an active and curious child. She loved being outside. She tried various sports and eventually found soccer, which she would vigorously defend as the world’s greatest (and according to Kristy, maybe the only) sport. She played in youth leagues which eventually led to playing on a high school team. After high school and college, she organized a women’s team, which gave her great satisfaction and fond memories of all of the women who participated. Kristy also had a love of music. She learned to play the piano in her youth. Music continued to be a lifelong love. She participated in school and church choirs. Many times she was called on to play the piano for musical numbers. She could sit for hours and play music, just for her own enjoyment. After becoming a regular at Huntsman Cancer Hospital, she volunteered to play the piano in their lobby once a week and thoroughly enjoyed the experience. Kristy’s ability to get work done was second to none. Completing jobs, tasks, goals and projects was one of the things that made her happy. Those who worked with her knew how strongly she felt about doing everything as well as possible. The true joy of Kristy’s life was her boys. She loved to watch them explore new things and experience the world through their eyes. She expected them to show pride in their school work and talked to them regularly about using their gifts to excel. She encouraged them to be each other’s champion and look out after each other. She taught them in the gospel. She loved the scriptures, and tried to make the stories come alive and be personal for them. Kristy is survived by her husband, Randy; her sons, Ammon Owen and Aaron Owen; her mother, Ada Jorgensen; her brothers Bryan (Atsuko) Jorgensen and Eric (Ragan) Jorgensen; her sisters Danyelle Jorgensen (Dave Albaugh), Jennifer (Steve) Weaver, and Maddie Jorgensen; and, her grandmother, Norma Florence. She was preceded in death by her father, Craig Jorgensen. Funeral services will be 11:00 am, Wednesday, April 12, 2017 at the Canyon Rim Third Ward, 3051 South 2900 East, Salt Lake City, Utah where a viewing will be held Tuesday, April 11, 2017 from 6:00 to 8:00 pm and Wednesday prior to services from 9:30 to 10:45 am. Interment and concluding services will be 3:00 pm, Wednesday, April 12, 2017 at the Brigham City Cemetery, 300 East 300 South, Brigham City, Utah. Flowers may be sent to 3171 Metropolitan Way, Salt Lake City, Utah. In honor of Kristy, the family would like everyone attending the funeral to wear something purple, if possible, as purple was Kristy’s favorite color.

The family of Kristy Lynette Jorgensen Cousins created this Life Tributes page to make it easy to share your memories.