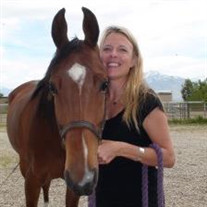 In the early hours of Friday, April 1, 2016, Lacey Anne Picard, D.C., age 42, left her broken body four-and-a-half years after a tragic accident September 5, 2011, at Silver Creek Junction in Park City near her home. Lacey’s bravery and optimism helped her to endure numerous surgeries and complications while residing at Bountiful Care Center in Utah, where she eventually passed peacefully. In addition to running her own successful chiropractic practice as a specialist in Directional Non-Force Technique (DNFT), Lacey was a massage therapist, a nutritionist, a beloved daughter, sister, and friend. Lacey was born in Atlanta, Georgia, on December 21, 1973, to Hans and Lyra Picard, joining an older sister, Linda Peters. In the summer of 1974, the family moved to the mountains of North Carolina. She attended English Chapel in Pisgah Forest, then Asheville Country Day and Hendersonville High. When Lacey was 16, she moved with her father and his new wife, Diane Samsel, to Cincinnati, OH, where Lacey attended Purcell Marian High School. She was a junior varsity cheerleader, served in student council, and won awards as a model and beauty pageant contestant. Following high school graduation in 1991, she entered the school for medical massage therapy in Lebanon, Ohio and was the youngest to graduate at age 19. The next several years found her at various colleges in constant pursuit of knowledge and new life experiences. In 1995 she attended Clemson University in South Carolina, then in 1996, she studied Eco-Tourism at Hawaii-Pacific University in Honolulu. Lacey later attended Hocking University in Ohio and Ohio State before finding her passion at Sherman College of Chiropractic in Spartanburg, South Carolina, where she graduated with a Doctorate of Chiropractic in 2006. She then moved to Aspen, Colorado with a close friend, Kirk Samsel, eventually moving on to Salt Lake City, UT, to begin her DNFT chiropractic practice in Holladay. Throughout her time in Salt Lake City, she enjoyed hiking the nearby canyons, attending outdoor concerts, cooking delicious meals, savoring robust California Chardonnays, dancing, skiing, horseback riding, and spending quality time with good friends. In the winter of 2007, she moved to Park City, and met, then fell in love with her boyfriend, Jason Decker. The two enjoyed skiing, hiking, spending time with friends, and managing their small hobby farm with horses, donkeys, and dogs in their rented home in Silver Creek, Park City. During her years at the Bountiful Utah Care Center, Lacey met and befriended many members of the LDS Church who visited often, offering their love and support. Her birthday wish was granted when she was baptized into the LDS Church, December 21, 2013. She was an active Branch member for the rest of her life. Lacey is survived by her father, Hans Picard, his wife Diane Samsel, her stepsister Monica Baltz, her mother, Lyra Picard, her sister, Linda Peters Watkins, her aunts and uncles, and many close friends. A celebratory memorial service for Lacey will be held Saturday, April 9, 2016, 4:30 p.m. at the Bountiful Utah Care Center, 401 South 400 East in Bountiful, Utah with the LDS Branch officiating. Religious service will take place 4:30-5:00 p.m., with a sharing of memories taking place 5:00-5:30 p.m. Her obituary can be found at Premier Funeral Home in Salt Lake City where condolences may be shared. Many thanks from family and friends to those who cared for Lacey at the Bountiful Utah Care Center. Thanks to Rhonda Devereaux and Linda Watkins, who dedicated precious time and support during the first crucial months of Lacey's accident and throughout the following years. Your service was incredibly selfless and words cannot express our appreciation for what you did for Lacey. Thanks also to service missionaries,Lori Burningham, Colleen Larsen, and a friend, McKell Williams for your dedicated service these past months and years. We have appreciated your love and support for our beautiful daughter and friend. To honor Lacey’s life, please make donations to the Park City National Ability Center (http://www.discovernac.org/programs/equestrian-programs/), which gives recreational opportunities to people with disabilities. Lacey volunteered at the center and her family would love for her legacy to live on through happy experiences offered there.

The family of Lacey Anne Picard created this Life Tributes page to make it easy to share your memories.