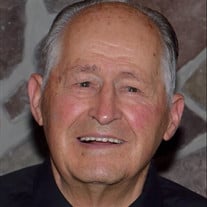 Lain Seymour Bytendorp, 97 years old, died August 23rd, 2018. Born July 29, 1921 in Rock Springs, Wyoming to Lain Albert and Arvilla Seymour Bytendorp. He was the first born of 7 with six younger siblings: Ruth (Tom Abbott), Ralph (Phyllis), Wanda (Lyle Spade), Albert (Joyce), Winona (Keith Rice), and LaReta (Jim Newlin). He has out lived all but Phyllis and Winona. A veteran of World War II, Lain fought in the battle of the Bulge in Germany. He married Donna Taylor, his eternal sweetheart, in the Salt Lake Temple on June 29, 1944. They leave a legacy of 9 children, 26 grandchildren, 40 great-grandchildren and 4 great-great grandchildren. He was an auto and top notch Jeep mechanic for 45 years, most of which was spent working for Hayes Brothers Buick. He also drove a wrecker as a second job. Lain served faithfully, over his life, in many callings as a member of the LDS Church. He was a volunteer fireman for South Salt Lake City, in the 50's, when most firemen were volunteers, and has been an honorary member for 50 plus years. He also served with the Search and Rescue. He loved Mother Nature and was a outdoor enthusiast who loved going camping and 4-wheeling with his family and friends. Lain felt one must stay physically active to live a long life so he retained a life time membership to a gym at which he would work out 2-3 times per week until the last 6-7 months of his life. He was a man of quick whit, hard work, and back in the day, would start up a conversation with almost anyone. He is survived by 6 of his children and their spouses: Linda Schoenfeld (Duane), (Terry Gandre) Gilda’s husband, James (Glenna), John (Debra), Fred, Carla Mills (Craig) and Reed (Shelly). Lain was preceded in death by his ‘Bride’ of 65 years, Donna, daughter, Gilda Gandre and sons, Bruce and Glen. A viewing will be held for family and friends to gather on Wednesday, August 29th from 6-8pm and again Thursday, August 30th from 10:00-10:45 a.m. A funeral service will follow at 11:00 a.m. These services will be held in the church at 6890 S Whitmore Way (2200 E). Internment will follow at Redwood Memorial Estates, 6500 S Redwood Rd. Special thanks to his nurse Susan, his CNA Klever, and all the special CNS staff involved in his care. We sure appreciate you!

The family of Lain Bytendorp created this Life Tributes page to make it easy to share your memories.