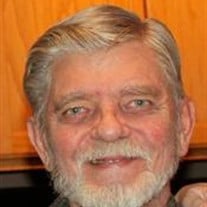 Major Larry A. Andersen, USANG, retired, born September 12, 1940, died December 9, 2013, of cancer. Larry attended West High School and graduated from Cyprus High School, where he enjoyed being a cheerleader. He married Linda Johnson and had one daughter, Stacey, later divorced. He graduated from Utah State University where he was also a cheerleader and a member of the Sigma Nu Fraternity . Married Patricia Smith, one daughter, Allicia. He joined the U. S. Army in 1966 during the Vietnam Era. He trained at Ft. Riley, Kansas, before applying and being accepted at the Officer Candidate School at Ft. Sill, Oklahoma. Following graduation as a 2nd Lt., he received orders for Germany. He greatly enjoyed his military service in Germany and he and Pat were able to travel to Holland, Austria, Italy, Switzerland, and France during that time. Military service was very important to Larry and upon returning to Utah, he joined the National Guard where he achieved the rank of Major. From 1969 to 1973, he was instrumental in building and operating Round Valley Resort golf course in Morgan, Utah. He was involved in several other property development projects. His last business was commercial painting on large projects such as the Capitol Theater, Rose Wagner Performing Arts Center and Abravanel Hall. After retiring, he discovered he had a talent for writing and he spent hours writing stories about people, happenings in his life, trips he took, and family. He also became an avid reader and would spend almost every day at the Murray Library. Family was very important to Larry and he never missed a family party or event. Survived by mother, Alma Youngberg Andersen; brothers Lynn, Stephen (Michelle); sister Catherine “Cathy”; former wife Patricia Andersen; daughters Allicia and Stacey; grandson Brittan; son-in-law Brad Davis; nephews Scott, Marty, and Dane; nieces Erica and Lora and other extended family. Preceded in death by father, Martin Andersen; uncles and aunts. Heartfelt thanks to the staff of Access Home Care and Hospice, especially Tami, for their care and support of Larry and his family during this painful time. Graveside services Wednesday, December 18, 2013, 11:00 a.m., in the Chapel of the Utah Veterans Memorial Park, 17111 Camp Williams Road, Bluffdale, Utah . A Celebration of Life for family and friends will be held that evening from 5:00 to 7:00 p.m., at Eggs In the City, 1675 East 1300 South, Salt Lake City, Utah. In lieu of flowers, please consider donations to the Cancer Society of Utah or a charity of your choice.

The family of Larry Andrew Andersen created this Life Tributes page to make it easy to share your memories.