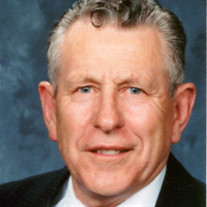 Larry Keith Bond, 82, passed away from cancer on August 11, 2018 after a life filled with love of family and the gospel of Christ. He was born Sept. 9, 1935 in Ramah, New Mexico to Charles Merlin Bond and Lois Irene Russell Bond. He was a lifelong devoted member of the Church of Jesus Christ of Latter-day Saints and served diligently wherever he was called. He was happiest when he was serving and always looked for opportunities to help and friendship others. He married the love of his life, Lois Bullock, on May 19, 1966 in the Cardston Alberta Temple. Family was always most important in his life and he always put them first. He took seriously his responsibility to teach and raise his children. He cherished his wife and he regarded and treated her as the most precious thing in his life. Larry grew up on a cattle ranch in New Mexico and loved horses. He did some rodeoing. His events included bull riding, bronc riding, and calf roping. He also had a deep love of music and played guitar, pedal steel guitar, and sang in several country music bands. He wrote and recorded a few original songs. Larry earned a BS degree from BYU, an MS from Arizona State University, and a Phd in Economics from Utah State University. He worked for the Economics Department at USU where he served as Farm Management Specialist for the Extension Service. He also did a lot of consulting work internationally. In the mid 1970's he took his family on a two-year assignment to Bolivia. Never content to sit still, when Larry wasn’t working, serving others, or fixing things around the house, he was learning new things. He earned his pilot’s license while attending BYU and later flew for the Civil Air Patrol. He had a great love of language and different cultures. He fluently spoke Spanish and learned the basics of German, and Navajo. Wherever he traveled, he would strive to learn a few phrases and words in the local language. He and Lois loved travel and saw much of the world. He has been to 30 countries, nearly every province in Canada, and every state in the U.S. On one trip to Alaska, he was attacked by a momma grizzly bear. He joked that his broken tooth was a result of him biting back at the bear. Later in life, Larry and Lois served two full time missions for the LDS church. First as executive secretary to the Central America Area Presidency in Guatemala City. And second, they served in the Family and Church History Mission in Salt Lake City. As a young man, Larry had also served a full time mission in the Spanish American Mission headquartered in San Antonio, Texas. Larry is survived by his wife Lois and seven of their children, Cindy Bond, Janine Berntson, Shauna Christenson (Michael), Keith Bond (Heidi), Linda Woodbrey (Robert), LeAnn Campbell (Paul), Carma Bartschi (Paul), 27 grandchildren, 5 great grandchildren, and his brother Kent. He was preceded in death by their daughter Helen and his parents. Funeral services will be held on Thursday, Aug. 16 at 11 am at the Perry LDS Stake Center, 685 W 2250 S. There will be no public viewing. Internment in the Providence Cemetery, River Heights, Utah.

Larry Keith Bond, 82, passed away from cancer on August 11, 2018 after a life filled with love of family and the gospel of Christ. He was born Sept. 9, 1935 in Ramah, New Mexico to Charles Merlin Bond and Lois Irene Russell Bond. He was a... View Obituary & Service Information

The family of Larry Keith Bond created this Life Tributes page to make it easy to share your memories.