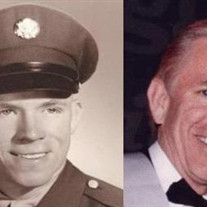 Lars Elliott Eggertsen died suddenly, of natural causes, on July 13, 2014 in Provo, Utah. Lars was born in Provo in March 1940. His parents were Nellie G. Elliott (Anderson) and Marcus D. Eggertsen. He attended school in Provo at BY Academy, then high school at East High School in Salt Lake City. He was the President of the Association of Boys at East High, joined the U.S. Army reserves when he was a junior along with his step-brother and good friend, Mike Moore. He completed basic training after graduation from high school at Fort Ord in San Francisco. He was in the reserves for 8 years and fulfilled 6 months of active duty during the time. Lars was an active member of LDS church, served a mission in Okinawa Japan in the early 1960s, and completed a degree in Asian Studies at Brigham Young University. Lars worked hard throughout the years-- mostly in direct sales; he loved talking with people, was tireless and unabashed in his efforts to make new connections and help people from all walks of life. He collected hundreds of books, and loved to give gifts of books. He was a lover of music. He danced, sang in many choirs, and went to the Mormon Tabernacle choir and other musical performances as often as he could. He is preceded in death by his parents and his spouse Sandra Young Campbell Eggertsen. He is survived by his sister Lynne Eggertsen Cook (Carlsbad, CA), children: Lani Eggertsen-Goff (Cottonwood Heights), Arthur Eggertsen (Park City), Lars M. Eggertsen (Provo), Sisilia Ane E. Winegar (Cottonwood Heights), David Lee Eggertsen (Cedar City), his former spouses Sandra Terry (Salt Lake City), Marilyn Gray (Provo), Stanislawa (Stasia) Habel (Provo),10 step-children, seven grandchildren and numerous step-grandchildren. A memorial service will be held 11:00 am, Friday, July 25, 2014 at the Provo Peak 11th Ward located at 195 South 100 East in Provo, UT. Arrangements are being made through Premier Funeral Services.

Lars Elliott Eggertsen died suddenly, of natural causes, on July 13, 2014 in Provo, Utah. Lars was born in Provo in March 1940. His parents were Nellie G. Elliott (Anderson) and Marcus D. Eggertsen. He attended school in Provo at BY Academy,... View Obituary & Service Information

The family of Lars Elliott Eggertsen created this Life Tributes page to make it easy to share your memories.