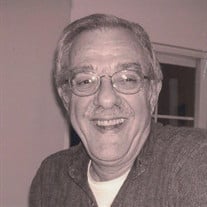 Lawrence Edward “Larry” Jewell 1942 – 2019 Lawrence Edward “Larry” Jewell, 77 of Orem, Utah, passed away peacefully Sunday, November 10, 2019 with his loving wife holding his hand, from his sudden cancer diagnosis. He was born January 1, 1942 in Osborne, Kansas to George Edward and Dorothy Veronica Jewell. He was the second of four children and the only son. Larry graduated Lemont High School, IL in 1960. Shortly after graduation, he joined the Army and served in Stuttgart Germany. He then married his sweetheart Sandra Herzog on January 29, 1966, in Hobart, IN where the weather that day was a high of -5 degrees Fahrenheit. And still to his last days he called her “Sweetheart”. Geneva Steel brought him and his family to Orem, UT. After US Steel closed Geneva, he went to Structural Steel & Fabrication, where he retired and then went to Walmart and built bikes and worked in toys. Larry sure loved his family! He enjoyed gatherings, playing cards, board games and doing jigsaw puzzles. You could always find a jigsaw puzzle on his puzzle board and he loved to have help from anyone with working on it. He always had fun with his grandchildren, summer picnics, loved going and supporting their school performances, basketball and baseball games, and dance recitals. If any of the grandkids would have a friend with them Grandpa always had a nickname for them right away. He was a grandpa to many more than just his direct grandkids. Grandpa Larry was loved by everyone. He was always so good with all the kids and animals. Larry was the dad that was always there if you needed him. Pops Jewell was a dad for many of the family friends. A dad for many that didn’t have their dads close. So many looked up to him. He listened, gave advice and just loved everyone unconditionally. He had a love to write lists, not only To Do lists but Everything lists. He was very meticulous at record keeping, very organized with everything in his three ring binders, and his tools and tool bench were always in the best of order. He could fix anything that needed to be fixed. He was just patient and would figure it out. He was also the best sliver getter outer! The kids have always had to go to grandpas to get their sliver out. He was always so polite to everyone and no matter the age he would always say “Thank You Young Man or Thank You Young Lady” even if they were the same age as him. Over the last few years, Precious (his nick name at Geneva) enjoyed his weekly breakfasts with his Geneva Buddies. Larry, Dad, Grandpa, Pops, Precious, no matter the name, you will be missed by so many family and friends. Thank you for everything you have done. We all will forever love you! He is survived by his wife Sandra Jewell, and their son Steven Jewell, son David (Chandra) Jewell, daughter Leeann (James) Masteller, daughter-in-law Debbie (Rick) Young all of Orem, UT and his six grandchildren Clay, Codie, Jeremy, Nicole, Kaylee and George, one great-grandson Mateo. Also survived by sisters Joyce (Max) Winkler, Shirley (Bill) Hackler, and sister-in-law Roxie Herzog. He was lovingly welcomed to the next stage of his journey by his parents, his parent in-laws, one sister, and two bother in-laws, also his beloved Smash was so excited to meet him at the Rainbow Bridge. We will hold a celebration of Larry’s life on Saturday November 16, 2019 at 6:00 p.m. at Timpview Chapel 865 West 1000 North, Orem UT 84057

The family of Lawrence Edward Jewell created this Life Tributes page to make it easy to share your memories.