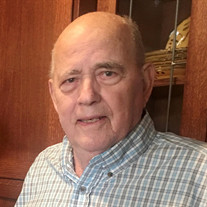 Lawrence Milton Kneedy 10/30/1927-10/20/2019 Lawrence Milton Kneedy “Larry” at 92 years young, passed away at home with his wife of 70 years, Dona Parker Kneedy and his son, J Lynn Kneedy by his side. Larry was born in Tetonia Wyoming to John L. and Sara Beard Kneedy. Larry was the fourth of five children, all sisters: Edith, Lorreine, Marybell and Sarajo. He was raised in a small log cabin at the base of the Tetons and on Mormon Row. In the times of the depression, the tragic Gross Venture Damn broke and the waters washed away his grandparents and the hopes of a future in the Jackson Valley. His family moved to Murray Utah in 1937 seeking work and a different life. A few years later, they moved to Kaysville, Utah to the corner of Main and 200 south. Larry enlisted in the Army infantry and was called to serve in WWII. On the ship to overseas, under miserable circumstances, the military men became sick with Strep Throat. Larry was diagnosed with Rheumatic Heart Fever and spent his war time in a hospital on a foreign land. Soon after his return home, his sisters introduced him to his future wife and Sweetheart Dona Parker. Larry and Dona were married in the LDS temple on January 26, 1949. On the same day and in conjunction with this celebration, both Larry’s parents and Dona’s parents (Grant and Viola Parker) were sealed in the temple. He never recounted the story without reminding us that it was the coldest day on record in Utah at a low of -15 degrees. Larry and Dona had two children, Craig and Lynn Kneedy. Larry was preceded in death by his son Craig Kneedy in 1995. A resident of Kaysville for over 75 years, Larry owned and operated Davis County Cold storage until his retirement in 1987. A jack of all trades and a man of many talents, Larry was widely known as a Butcher, an avid Scout master, a helpful neighbor and a talented wood worker. Larry loved and devoted his life to his family. He treasured his sisters and their families. He enjoyed visiting his “homeland” to see cousins and friends in South Leigh Canyon. He enjoyed traveling the world with lifelong friends. He loved his wife. He cherished his children and grandchildren. Larry was always present, whether it be to swing a hammer, run the saw, attend a t-ball game, concert, award ceremony, graduation, fishing trip, or road trip. We will so miss and forever remember Larry’s uncanny ability to recite a poem, recount a story or sing a song. When his body became weak, his mind, heart and hugging arms stayed strong; if we had to pick what we will miss most, it will be his Grandpa Bear Hugs and scratchy whiskers. We will Love you, for all time, a bushel and a peck. Larry is survived by those most precious to him, his Wife: Dona Parker Kneedy, Grand Children: Michele (Matt) Weyland, Jason Kneedy, Brian (Jenny) Kneedy, Joni (Tyson) Porter, their combined 13 children and their mother, former daughter in-law Meg (Kevin) Wooten. He is also survived by his Son J Lynn and wife, Judie Kneedy, including Judie’s children: Nico (Elisha) Suazo, Valerie Archuletta and their combined 6 children. We want to note a special thank you for the oversight and care that Georgie Danner has provided to both Larry and Dona, allowing them to stay in their home together until this day. As well a thank you to Inspiration Home Health and Hospice that helped ensure Larry’s last wish to be at home was fulfilled. At their hand-written request, only a graveside will be held. Friends and family are all invited to attend. Time and Date: Thursday October 24, 2019 at 12:00pm at the West Point Cemetery (80 N. 4000 W. West Point, Utah, 84015) And so with that…..Boop, Boop, dit-tem, dat-tem, what-em, chu.

The family of Lawrence Milton Kneedy created this Life Tributes page to make it easy to share your memories.