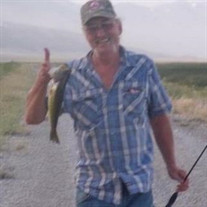 Lawrence Fredrick “Larry” Kruckeberg Larry, known as “Kruck” to many of his friends and family, passed from this life on June 24, 2018. Larry was the son of Shirley Clay Kruckeberg and Robert Kruckeberg. He spent much of his young boyhood on his Grandmother Kruckeberg’s farm in Ohio and visiting his maternal grandparents in Indiana. He loved being in both places and could entertain you for hours with stories about growing up there. The family moved to Farmington, New Mexico where he spent his school years and developed a lifelong interest in motorcycles and cars. The family relocated to Las Vegas, Nevada where 18 year old Larry was drafted into the Army and served two tours of duty in Vietnam. He was honorably discharged and received the Purple Heart. Larry married Leslie Gertie and was blessed with a son Raymond and then a daughter Shirley. His children meant everything to Larry. He loved the outdoors and would take the family hunting, fishing, snow skiing, riding snow mobiles and ATVs. His passions were restoring cars and riding his Harley with a group of friends. He passed his love of the outdoors and cars on to his children who still enjoy many of those activities. Larry was preceded in death by his parents, his mother-in-law and father-in-law, his maternal grandparents, his paternal grandparents, and several aunts and uncles. Larry is survived by his son Raymond (Erica) Kruckeberg, daughter Shirley (Jeff) Muir; ex-wife Leslie Gertie; granddaughter Dakota Kruckeberg, grandsons David Muir and Levi Kruckeberg, and sister Linda (David) LaPointe. Larry always lent a hand when needed and was a true and loyal friend to his family and many friends. He will be missed by them all.

Lawrence Fredrick &#8220;Larry&#8221; Kruckeberg Larry, known as &#8220;Kruck&#8221; to many of his friends and family, passed from this life on June 24, 2018. Larry was the son of Shirley Clay Kruckeberg and Robert Kruckeberg. He spent much... View Obituary & Service Information

The family of Lawrence Fredrick Kruckeberg created this Life Tributes page to make it easy to share your memories.