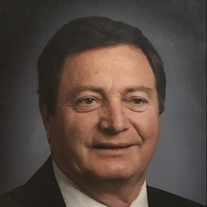 Our beloved father, grandfather and great-grandfather Le Roy "Lee" Nile York was called home Tuesday morning October 16, 2018. He was born on July 14, 1934 to William Roy Columbus York and Irene King York Thomas & David Alfred Thomas. He was preceded in death by his eternal companion Louise Rae Bailey York (December 16, 2008), as well as his son Darin York (July 28, 1979), his parents and many more family and friends. Lee and Louise were married on June 22, 1957, and later sealed to each other and their family, for time and eternity, in the Salt Lake Temple on June 6, 1972. He is survived by his 4 children, Dawna Baker (Larry), Brian York (Eve), Bradley York, and Douglas York (Karen), 16 grandkids and 2 great-grandkids. He is also survived by his sister Alene Thomas Bailey (Wayne), her four children, and her grandchildren. We all loved him so much and are grateful for the many memories and laughs we have shared with him over the years. We will miss all the conversations we had, we will miss his corny sense of humor but most of all we will simply miss him. We are very grateful that he is reunited and happy with his beautiful wife Louise. All who knew him know how much he missed her and longed to be reunited with her again. Besides his family and friends, he cherished the relationships he held within the University of Utah, and specifically the Athletics Department. Not only was Lee a fan of “The U,” he was also an employee (retiring from operating the Union building, as well as being an usher and vendor), a mentor and friend to the athletes and coaches, and just an overall great man of that school that most everyone knew and enjoyed interacting with. Especially, in his post retirement years the players really grew to love “Pops York”. Truly, if ever a man earned the right to be called a “Utah Man Sir”, it was Lee York. Secure in the knowledge our Savior Jesus Christ and knowing he has gone “home” now, has helped to ease his passing for his family and friends. We love you dad, grandpa, and “Pops”! God be with you till we meet again, families are forever, and of course… Go Utes! Funeral Services will be held on Monday October 22, 2018 at 11 a.m. at the Jordan North 1st Ward, 3900 S. 4000 W. The family will receive friends at a viewing Sunday evening from 6:00 until 8:00 p.m. at the church, and two hours prior to the service on Monday. Interment: Valley View Memorial Park.

The family of Le Roy "Lee" Nile York created this Life Tributes page to make it easy to share your memories.