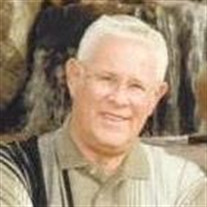 Leland Welcker Carson passed away on December 2, 2016 at his home surrounded by his family after many years battling various health issues. He was born May 7, 1939 in Lehi Utah, Son of Truman John and Mildred Louise Welcker Carson, and Brother to Shirley Hogensen. He grew up in Fairfield Utah, and graduated from Lehi High School where he met his sweetheart Kaye Willes. While courting Kaye and after they were married he worked at wholesale foods and served in the National Guard with the unit that built guardsman Pass. Leland and Kaye were married and sealed in the Salt Lake City Temple November the 9th, 1956. They moved to Tacoma Wa, where he attained his private pilot's license, and worked for the Boeing Company. They lived in Sunset, Utah after transferring to Hill Air Force Base for boeing. He worked on the minute men missles and retired as a property administrator on January 3, 1997. He loved flying planes, riding motorcycles, shooting his guns, working in his Vegetable garden and beautiful flower gardens especially with his roses, but most of all he loved camping with his family. He served many callings for the Church of Jesus Christ of Ladder Day Saints, including the building of two Chapels. We will miss his sense of humor, knowledge, his big hugs, and all his love. Lee is survived by his sister Shirley, wife Kaye and their seven children, Kevin, Wendy (Ken) Morse, Julie, Christine (Daniel) Perkins, Jodie (Kevin) West, Michelle (Robert) Sheppard, and Nicole. twenty two grandchildren, and 22 Great Grand Children, One great Grand child. Lee is preceded in death by his parents Truman and Mildred, Marvin Hogensen (Brother-in-law) Brandon Mark Carson, (grandchild) Nicholas James Morse, (grandchild) A viewing will be held Wednesday December 7th, 2016 from 6 until 8 Pm in the primary room of the Roy 13th ward 5127 South 2400 West in Roy, Utah. Funeral Services will be on Thursday December 8th, 2016 beginning at 11 a.m. in the chapel of the Roy 13th ward 5127 South 2400 West Roy, Utah. Interment at the Roy City cemetery. The family would like to thank the Hospital staff at Mckay-Dee and Ogden Regional, Hospice at A Step Forward, and the many Doctors that have cared for him. In lieu of flowers please donate to the National Kidney foundation of Utah. www.kidneyut.org or to the Primary Children's Hospital, primarychildrens.org

Leland Welcker Carson passed away on December 2, 2016 at his home surrounded by his family after many years battling various health issues. He was born May 7, 1939 in Lehi Utah, Son of Truman John and Mildred Louise Welcker Carson, and Brother... View Obituary & Service Information

The family of Leland Welcker Carson created this Life Tributes page to make it easy to share your memories.