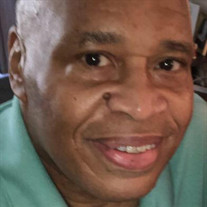 The Life of Lenny Bolton Leonard E. Bolton was a quiet, gentle spirit, born December 07, 1952 in Greenville, Mississippi. He spent his childhood and adolescent years in Chicago, Illinois under the “mothering” guidance of his maternal great-aunt, Minnie Lee Bolton-Boice. His family called him “Bubba”. Minnie Lee instilled in Lenny and 2 of his 6 siblings a very strong sense of solid work ethics, with a monthly indoctrination of “be the BEST at whatever you choose to do”, using humorous stories to make her point. Lenny, an older sister and his oldest brother walked to Betsy Ross Elementary School, 4 blocks away from their home, daily. After graduation, he attended Dunbar High School where he enjoyed a position as linebacker on the football team. Lenny maintained a high grade-point average (even carrying an extra academic load) and worked at Bi-Rite grocery store (earned “most valuable employee” recognition). The family was very proud of Lenny, graduating at the top of his class and earning an academic as well as a sports scholarship. As Lenny began packing to attend Iowa State University, his 3 year-old niece, Tanya sat in his suitcase yelling “you can’t go !” Tanya adored her uncle so much. She would sit outside the bathroom door and follow him everywhere he went. Lenny played football for Iowa State University as he maintained a solid academic average and worked in construction during summer months. Leonard E. Bolton graduated with Bachelors and Masters Degrees in Accounting in 1975 (a “full-ride” scholarship for a 5-year program). Lenny was the first college graduate in his family. The two siblings he was raised with as well as the other three he had not come to know very well were filled with pride over their brothers’ accomplishments. After college graduation, Lenny accepted career opportunities in Minnesota. Having lived and worked in Minnesota for many years, he went to Milwaukee, WI. to live a short time with his sister and his niece Tanya (now a teenager). Later, Lenny accepted a job in Denver, Colorado and it quickly became his favorite place to live. It was there that Lenny reunited with an old friend, Diana, who had two daughters. They married for a short time and divorced. After the divorce, Lenny moved to Texas to live with and become more acquainted with his youngest brother. From Texas he moved and settled in Utah where he lived a few years and spent his final days. Lenny will be remembered for his laugh, sense of humor, cooking and his many talents and skills. Lenny was baptized in 2018 at Wasatch Hills Seven-Day Adventist Church in Utah. Leonard was preceded in death by: his beloved “Mama” Minnie Lee Bolton-Boice, his birth mom Minnie Bolton-Beamon, grandfather Percy Leroy Bolton Sr.; nephew Jeffrey Bolton-El; great-grandparents, and uncles and aunts. Lenny’s legacy will be cherished by; two sisters; Carol A. Bolton-El, Mentha “Bonnie”Bolton-Bakari; three brothers; Merrion France McAlbert Bolton ll “Mack”; Charles Beamon Jr. (Joye); Percy Leroy Beamon (Rita); nieces; Monique LaTanya Whiteside-Armstrong, Miriam James, Michelle Bolton, Tawana Ogletree, Tamika Beamon, Tiffany Beamon; nephews; Nathaniel Bolton-El, Charles James Beamon a host of great-nieces and great-nephews, cousins; Victoria Bolton-Barber; Merrion Bolton Jr. “Butch”; friends; Larry McKinstry, Becky Shaw, Angel Maynard, a long list of family & friends, as well as church friends and other well-wishers.

The Life of Lenny Bolton Leonard E. Bolton was a quiet, gentle spirit, born December 07, 1952 in Greenville, Mississippi. He spent his childhood and adolescent years in Chicago, Illinois under the &#8220;mothering&#8221; guidance of his maternal... View Obituary & Service Information

The family of Lenny E Bolton created this Life Tributes page to make it easy to share your memories.

The Life of
Lenny Bolton