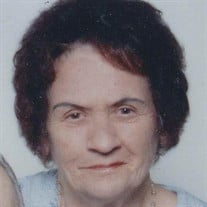 Lenore Joyce “Johnnie” Sanderson Carter 1927 - 2017 Lenore Joyce “Johnnie” Sanderson Carter, passed away peacefully on July 9, 2017 in Spanish Fork, UT at Legacy House Assisted Living facility. She was 89 years old and died of natural causes. She was born in San Francisco, CA to Raymond H. and Gladys I. Baker Sanderson on September 21, 1927. She was married to Garn V. Carter on February 7, 1953. They were sealed together in the Salt Lake City LDS Temple on May 24, 1967. She is survived by her stepsons Wayne G. Carter (Robin) and Rodney Q. Carter, sons Marvin L. Carter (Michelle) and Alan G. Carter. She had 12 grandchildren and 29 great-grandchildren. She was proceeded in death by her loving daughter Judy Ann Carter and her husband Garn. She was raised in Los Angeles, CA. She graduated from John C. Fremont High. After that she attended the Frank Wiggins Trade School where she excelled in photography and journalism. Lenore worked at the Provo Daily Herald newspaper as a photographer and a scanagraver operator in the 1950’s and 1960’s. She had a dark room in her home that she worked from as a professional photographer, especially enjoying wedding and baby pictures. She loved every minute of it! She also worked at the Provo Elks Club and Westwood’s cafe. She loved the outdoors and the beauty of the flowers, countryside and mountains. She enjoyed walking her dog. She also enjoyed sitting in her front yard waving to friends as they passed her home. Lenore and her husband and children enjoyed hiking in the desert hills and valleys, finding many arrowheads and antique bottles. She also loved to go camping and deer hunting with her family. When she was younger she became an excellent ice skater. Lenore and Garn were also avid bowlers and bowled in many local bowling leagues. They had many trophies marking their accomplishments. She was a member of The Church of Jesus Christ of Latter Day Saints. She held many callings in the church. Some of them were: Womens Conference Hospitality Chairman, Relief Society Historian (for over eight years) and Public Affairs Representative. She and Garn were door greeters for many years. She also worked in the Provo LDS Temple for seven years. She was involved in working at the BYU History Library doing her family genealogy for many years. Lenore enjoyed helping people and making quilts in her extra time for local care centers. She also loved working in the Senior Companion program helping seniors with travel and companionship. Another joyful involvement for her was at the Sunset View Elementary School with the 1st grade children, helping them with their reading and math for six years. In her later years her boys were very devoted to her until the time of her death. It was a blessing to her and her sons to have that time to grow closer as a family. In lieu of flowers please donate to local volunteer programs. Graveside services will be 11:00 am, Wednesday, July 12, 2017 at the East Lawn Memorial Hills Cemetery, 4800 North Lawn Drive (650 East) Provo, Utah.

The family of Lenore Joyce Sanderson Carter created this Life Tributes page to make it easy to share your memories.