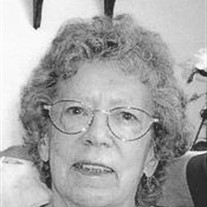 Leola Mae Edwards Holmberg, age 90, passed away on September 30, 2012, at the home of her daughter, Patricia Hyde, in Orem, Utah. Born in Beaver, Utah, on May 16, 1922, Leola was the fifth of 16 children born to David Heber Edwards and Agnes Anne Bradshaw. Leola grew up with 6 brothers and 7 sisters in McGill, Nevada, where she graduated from White Pine High School in Ely, Nevada in 1940. She married Lawrence George Holmberg of Duluth, Minnesota on St. Patrick’s Day in 1942 in Seattle, Washington. They were sealed for time and eternity in the St. George Temple in 1974. Leola and Lawrence had a family of three children: Anna, Patricia, and Robert. During most of their married life, she and Lawrence lived in Minnesota. Their first Minnesota home was a farm located west of Sandstone; they subsequently lived in Duluth, North St. Paul, Hastings, and Outing. When Lawrence passed away in 1987, after 45 years of marriage, Leola relocated to Boise, Idaho, to live with her son, Robert and his family. In 2006, she moved to Orem, Utah to live with her daughter, Pat and her family. Leola was a devoted wife and mother, and worked hard and enjoyed her life on the farm where she was essentially the foreman and chief gardener, as well as a 4-H Leader for the surrounding countryside. From 1958 to 1964, Leola worked as a lab technician for Dr. Rudolph in Sandstone, Minnesota. She graduated from the Duluth School of Practical Nursing in 1965 and became an LPN. In 1976, she became an RN after graduating from the Inver Hills Lakewood Nursing Program, and subsequently worked at various hospitals in the St. Paul area. Her favorite nursing experiences were with the babies and handicapped children at Gillette Hospital. Leola was articulate and informed because of her love of reading. She had a lovely singing voice and sang in several church choirs. For many years she crocheted numerous afghans for her grandchildren and others. In her younger years, Leola took an art instruction course, and developed her artistic skills, but her real love was playing the organ. She had learned to play the piano as a girl, but it was during her middle years that she received organ lessons. Subsequently, she enjoyed playing the organ at Church and in the Boise Temple. She served as an organist and an ordinance worked in the Boise Temple for sixteen years. She is survived by her two daughters, Anna Klingler (Brent), Patricia Hyde (Paul) and her son Robert Holmberg (Cheryl), 15 grandchildren, 51 great-grandchildren, and 2 great-great-grandchildren. She is also survived by four of her younger siblings: Marjorie Clark (Curtis) of El Paso, TX; Earl Edwards (Kayleen) of Elko, NV; Elizabeth (Betty Gidley (Robert) of California; and Elaine Harrison (Jay) of Elko, NV., as well as by numerous nieces and nephews scattered around the world. Her siblings who preceded her in death were: Kenneth (Lillian) 1997, Albert (Dorothy) 1975, David (infant) 1918, Margaret Utley (Clifford) 2001, Beatrice Coates (Willis Junior) 2003, Richard (Lorraine) 2011, Gladys (infant) 1926, Robert (Alice) 1993, Donald (Jody) 2006, Helen Harper (David) 1996, and Jane Adair (Gerry) 1991.

Leola Mae Edwards Holmberg, age 90, passed away on September 30, 2012, at the home of her daughter, Patricia Hyde, in Orem, Utah. Born in Beaver, Utah, on May 16, 1922, Leola was the fifth of 16 children born to David Heber Edwards and... View Obituary & Service Information

The family of Leola Mae Holmberg created this Life Tributes page to make it easy to share your memories.