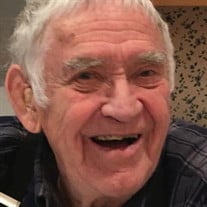 Leonard T Taylor, beloved husband, father, and friend to all, passed away February 11, 2021, of natural causes incident to age. After celebrating his 94th birthday he decided it was time for him to go. Our dad was born January 31, 1927, to Samuel Henry and Othelia Hanks Taylor in Salem, Utah, the youngest of eight children. Although he grew up in humble circumstances he made the most of life. The stories he told of his childhood included skating on Salem Pond, floating the canals, and exploring the hills above Salem. He learned to work at an early age, helping his dad on the family farm and traveling with him from town to town throughout central Utah selling the vegetables they grew. Dad was part of the greatest generation, having served our country in the U.S. Army as World War II was coming to an end. He came home from the war and worked for the Purity Biscuit Co. Not long after, he met and married Maxine Clapham on August 19, 1949, in the Salt Lake Temple. Shortly thereafter they bought a small home in the countryside with some land for a garden and orchard, in the Canyon Rim area of Salt Lake, where their four children were born and raised. Dad lived in that remodeled home for 68 years, up to the day he passed away. Our home and surroundings was a wonderful place to grow up. Dad and Mom taught us kids how to grow and harvest the food we ate. They raised nearly every kind of fruit and vegetable there was to be had, and we learned to love working the land. Mom died of a brain aneurysm on July 19, 1974, at the young age of 40. Oh how hard that was for Dad and us all. About a year later, June 1975, Dad married Alta Wallace who was so good to him. They were married for 41 years until her death in 2016. Dad was a loving and faithful husband in both marriages, and Mom and Alta were a great blessing in his life. Dad was a carpenter by trade and worked hard to provide for his family. He was a do-it-yourself guy making do with what he had, and he taught his children to do the same. He and Mom taught us all to work hard and to play hard, to love gardening the good earth, and to become self reliant. They taught us to love the outdoors. We loved being together and playing together as a family. Although Dad encountered his share of hardships, he always felt like he had a great life. He made the most of everything that came his way, filled with gratitude and seldom a complaint. Dad had amazing neighbors that were so good to him. They looked in on him and cared for him to the end. At 94 years of age Dad not only endured to the end, he lived life to it’s fullest! His good life and all he taught us will bless generations to come. Leonard is survived by his children: Calvin (Sue) Taylor, Kim (Mary) Taylor, Julie (Bryon) Nielsen, Janene (Glen) Davis, Rick (Joann) Wallace, Linda (Vance) Murphy, and Lisa (Doug) Dilley, plus 24 grandchildren and 57 great grandchildren, and his sister Helen Ede (96 years old). Dad was preceded in death by his brothers and sisters, Clawson Taylor, Lorenzo Taylor, LaRee Sorenson, Reed Taylor, Elden Taylor, and Reta Bickham, and his son Scott Wallace. A funeral service will be held Wednesday, February 17, 2021, at 11:00 AM in the Rosecrest 2nd Ward chapel, 3101 South 2300 East, Millcreek City, Utah. A viewing will be held prior to the funeral, from 9:30-10:30. If unable to attend the funeral service, one can view the service online at the following URL: http://mywebcast.churchofjesuschrist.org/saltlakecanyonrimstake

Leonard T Taylor, beloved husband, father, and friend to all, passed away February 11, 2021, of natural causes incident to age. After celebrating his 94th birthday he decided it was time for him to go. Our dad was born January 31, 1927, to... View Obituary & Service Information

The family of Leonard T Taylor created this Life Tributes page to make it easy to share your memories.

Leonard T Taylor, beloved husband, father, and friend to all,...