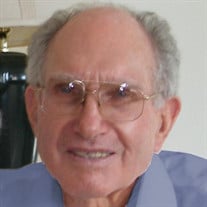 LeRoy Lee Condit August 5, 1930 – May 9, 2021 LeRoy Lee Condit passed away peacefully May 9, 2021, at the age of 90 in the Mervyn Sharp Bennion Central Utah Veterans Home. LeRoy was born August 5, 1930, in Albuquerque, New Mexico, to Watson Ellsworth Condit and Esther L. Shields. He was the 7th of ten children. He graduated in 1949 from Delta High School in Delta, Colorado. During his high school years, he played the tuba and sousaphone in the band and orchestra, where he lettered for three years in band. He also played football as an offensive and defensive tackle. He was a two-year letterman in football and his team won the region championship his senior year. He earned a football scholarship to the University of Colorado. He met his eternal companion and sweetheart, Wanda J. Clark, in their 11th grade English class. He was new to the town and school and his new seatmate really caught his eye! They married 3 years later in the Methodist church in Delta, Colorado. They moved to Albuquerque, New Mexico, where LeRoy started his career in construction. When he learned that his draft number was about to come up, he went down to the Navy recruitment office and asked to enlist. All his brothers were Navy men and he felt like the Navy would be a good fit for him. He passed bootcamp with high marks and was given his choice of schools. He chose the Construction Battalion (CB) school where he learned skills that would serve him well over his lifetime. After CB school, LeRoy was stationed on the island of Guam building Navy housing. He had the opportunity to bring his sweetheart to Guam where they lived on the beach for 3 years before being honorably discharged and returning to the states. The missionaries knocked on their door and the idea of eternal families made sense to both of them, and they joined The Church of Jesus Christ of Latter-day Saints in 1962. The family was sealed in the Mesa, Arizona Temple on February 14, 1964. LeRoy worked for George Rutherford Construction for much of his career, advancing from Laborer all the way up to Superintendent. Before the idea of sub-contractors, he was able to learn all aspects of construction, concrete, electrical, plumbing, framing, roofing, and more. Later in his career he started his own construction company, Condit Construction, LLC. He was a skilled carpenter and really enjoyed building! LeRoy welcomed the opportunities to serve others that the church brought to his life. He could always be relied upon to help in whatever capacity was needed. He served as a counselor to 4 different bishops, as a ward clerk, high councilman, stake executive secretary, and high priest group leader. He and Wanda served as temple workers in both the Denver and Provo temples. In 2001, LeRoy and Wanda were called on a mission to manage the Bishop’s Storehouse in Spanish Fork. He loved being called Elder Condit for the first time in his life. The mission term was to be for 18 months. They did such a good job and enjoyed it so much they stayed and served in that capacity for 5 years! Over the years they lived in several different places including Albuquerque, New Mexico and Littleton, Colorado, before retiring and settling in Utah County to be closer to their girls and grandchildren. LeRoy is survived by three daughters: Beth (Hal Gunter), Julie Snelgrove Brown, and Amy (Troy Lilly); 15 grandchildren: Leah, Erin (Kurt Bastian), Peter (Karla), Laura (Justin Sierakowski), Nyle (Jessica), Jean, Carl, Sadie, Evalee and John Gunter; Stacy (Chase Nielsen) and Scott (Brittany) Snelgrove, Cassandra (Christopher Holt), Ariana (Dathan Spencer) and Ethan (Jen) Lilly; and 16 great grandchildren: Austin & Nathan (Erin), Itzel, Grace & Helen (Peter), Livia, Elsie & Bethany (Laura), Braxton, Levi & Elise (Nyle) Chloe & Lettie (Stacy), Zuri & Sunnie (Scott), TeraLynn (Cassandra). A special thank you to the nurses, aides, and staff at the Mervyn Sharp Bennion Central Utah Veterans Home for the care and compassion unselfishly given to our dad over the last 22 months. Funeral services will be held at 11:00 am, Saturday, May 15, 2021, at the chapel on 3477 East River Bottom Road, Spanish Fork, UT 84660. A viewing will be held from 10:00 am – 10:45 am, followed by interment at the Spanish Fork City Cemetery, with Military Rites being provided by the United States Navy Honor Guard. Condolences can be sent to the family at www.premierfuneral.com

The family of LeRoy Lee Condit created this Life Tributes page to make it easy to share your memories.