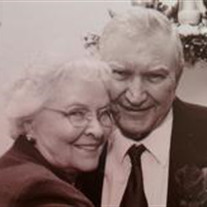 Our beloved Husband, Father, Grandfather, and Great-Grandfather (Poppy) passed away peacefully at home on September 19, 2011 surrounded by his family. Earl was born on June 7, 1924 in Besoco, West Virginia to Jacob Caudle Meadows and Martha Emeline Wallace. He married his sweetheart, Doris Hampton, on December 12, 1946 and they began their married life in West Virginia. They moved to Greenbelt, Maryland in 1953 and lived there 17 years while raising their two sons – Daniel and Thomas. They also lived in Lanham and Dunkirk, Maryland before retiring to Lakeland, Florida in 1985. They recently relocated to Salt Lake City, Utah to live near two of their granddaughters. Earl served in the Navy from 1943-46 in the South Pacific during WWII. He retired in 1980 from civil service where he worked for the Department of Defense in Maryland. Earl was a self-taught musician and avid bluegrass fan who sang and played the guitar, fiddle, and mandolin. He regularly “picked” and sang with family and friends throughout his life and played with local bands in Auburndale, Florida. In addition to playing music, he loved to buy, refurbish, and resell instruments and was well known as “The Guitar Man” at flea markets throughout Polk County. Earl is preceded in death by his parents, 5 sisters, 4 brothers, and his son, Thomas. He is survived by his wife, Doris; son, Daniel and his wife, Joanna; four grandchildren: Rachel (Jared), Donna (Buddy), Rebecca (Nathan), and Jacob; 9 great-grandchildren; and his two brothers: BJ and Tex. A private memorial service is planned by his family for a later time. In lieu of flowers, the family suggests a donation to IHC Hospice at: 2250 S. 1300 West Salt Lake City, UT 84119 | PH#: (801) 977-9900. The family wishes to express our deep gratitude for the loving and compassionate care they provided to Earl before his passing. Earl was beloved by many family and friends. He will be greatly missed, but always remembered.

Our beloved Husband, Father, Grandfather, and Great-Grandfather (Poppy) passed away peacefully at home on September 19, 2011 surrounded by his family. Earl was born on June 7, 1924 in Besoco, West Virginia to Jacob Caudle Meadows and Martha... View Obituary & Service Information

The family of Leslie Earl Meadows created this Life Tributes page to make it easy to share your memories.