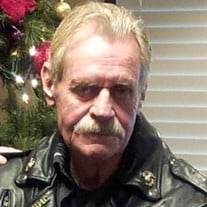 Trust in the Lord with all your heart, and lean not on your own understanding. In all your ways acknowledge Him, and He shall lead your paths. Proverbs 3:5-6 Leslie Howard Means 71, moved into Heaven on June 24,2014. He was born May 26, 1943 in Salt Lake City, Utah to James Means and Ethel Wan Record (Stanley) Les was a veteran of the Cuban Missile Crises, severed in the U.S. Marine Corps. Once a Marine, always a Marine. He deeply loved the south. He lived in Tennessee 30 years with his wife Betty, and became a Civil War Buff. He was a long-haul truck driver for more than 40 years. He was a hard working loving son, brother, husband and faithful friend. He was always willing help others in need. He will be deeply missed. He is survived by his mother Ethel Stanley; children , James Means Jerry Owens, Donna Owens ,Donny Owens ,DJ Means-grandson (Son of Tracy Means later adopted by Les & Betty Means). Siblings, Jim Means, Connie [Don] Patton, Leila Stanley Goodrich, Laura Stanley; 20+ grandchildren. Devin Goodrich & Brooklyn Robison whom he took under his wings. Also Survived by his Fiancé' Debbie Coster. Thank you Debbie and Shannon for taking care of Les. Preceded in death by his daughter Tracey Means. His Dad Billie Lee Stanley; brother Kenneth Standlee; First wife, Sherry Means, Second wife Suzie Means, Third wife Maris Means. Memorial services will be at 6:00p.m.-8:00p.m. Tuesday 15,2014 at the Calvary Chapel Salt Lake 460 W. Century Dr. (45th south) Salt Lake City, Utah 84123 As Les would say; Here's what! See ya'll later Your right behind me Bring a Smile, Bring a Memory-Come as you are. And don't forget to pray! Burial will be at Veteran's Memorial Park at a later date.

Trust in the Lord with all your heart, and lean not on your own understanding. In all your ways acknowledge Him, and He shall lead your paths. Proverbs 3:5-6 Leslie Howard Means 71, moved... View Obituary & Service Information

The family of Leslie Howard Means created this Life Tributes page to make it easy to share your memories.

Trust in the Lord with all your heart, and lean not on your own...