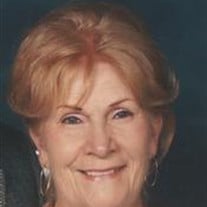 Liberty Bell “Berty” Russell Our brave and well loved mother, grandmother, and sister, Liberty Bell Russell, 94, passed into the welcoming arms of her sweetheart and husband of 72 years (and reunited with her black lab, Jake) on June 16. “Berty” was born on the Fourth of July 1918 in Kanab, Utah, in a covered wagon on the way to Salt Lake City. She met William (Bill) Russell in a logging camp in Westwood, California, and they married in 1939. Bill’s job on earth was done one year sooner than hers. Although missing him terribly and telling him “goodnight, I love you” every night, she bravely carried on with optimism and a smile, sustained by her devoted children in her desire to stay in her own home. Mother’s highest aspiration was to become a homemaker and mother. She was a great success. She is survived by five grateful children: William (Trine Jensen) Russell, Jan (the late Manuel) Nunes, Patricia Russell, Sharon (Don) Kimball, and Rebecca Russell, as well as her sister Bonnie Rowley Sweat. She has 8 grandchildren who honor and adore her, and 6 great grandchildren, all but one of whom were fortunate enough to know her. Mother proudly worked for and achieved her high school diploma when she was in her fifties. She played the piano by ear and instilled a love of music in her children and grandchildren. She baked, scoured, sewed, spoiled dogs, and mowed the lawn with a hand mower. She personally planted the more than 100 huge trees that now shelter the home she created with her husband. Mom and Dad loved golf (she got a hole-in-one) and the Utah Jazz. The Jazz games will never be the same without the two of them, wearing their matching Jazz t-shirts. In contrast to her “salt of the earth” essence, she dressed elegantly and was beautiful, inside and out. She loved us well. Her love was always, always unconditional. She saw the best in people. She always had a charitable interpretation of other people’s choices and empathy for their trials. Mother was a lifelong member of the Church of Jesus Christ of Latter Day saints. She had an inquiring mind and also great faith that never wavered. She has been an inspiration to many, including nieces, caregivers, and friends. She loved and honored her parents, as well as her husband, throughout her life. She was preceded by her beloved parents, R.I. and Zina Rowley, four sisters, and two brothers. The family would like to thank Mayte Bastida, Jamie Bunker, Seppi (an angel in disguise), and CNS for loving and understanding service to Mother. A celebration of her life will be held at 1:00 pm on Monday, June 24, at the Winder 4th Ward, 950 East 3825 South, Salt Lake City. Instead of flowers, Mother’s choice was a donation to the Humane Society or an animal rescue group.

Liberty Bell &#8220;Berty&#8221; Russell Our brave and well loved mother, grandmother, and sister, Liberty Bell Russell, 94, passed into the welcoming arms of her sweetheart and husband of 72 years (and reunited with her black lab, Jake)... View Obituary & Service Information

The family of Liberty Bell Russell created this Life Tributes page to make it easy to share your memories.