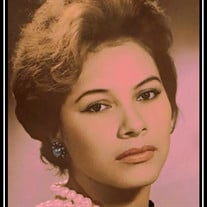 Salt Lake City, UT &#8211; Mama Lila, age 78, was welcomed into the other side of the veil by her caring husband, dear parents, and other departed loving family members on Sunday April 7, 2019. She was named Lydia Almazan Rodriguez being the... View Obituary & Service Information

The family of Lidia Almazan created this Life Tributes page to make it easy to share your memories.