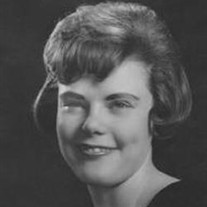 Linda Bird Greene West Valley City, UT – Linda passed peacefully in her sleep following a two week vigil surrounded by family and friends on both sides of the veil. Her final lucid moments were spent asking her daughters and grandchildren to sing Christmas carols for her. Linda Bird Greene was born in Provo, Utah on 19 July 1943 to Kenneth and Inez Bird, passed away on December 26th 2014. She married Kenneth LaRay Greene on 19 July, 1963 in the Salt Lake Temple; they were later divorced. She enjoyed handcrafts, old movies, square dancing, ceramics, making candies, and spending time with her family. She is survived by her daughters Barbara Fidler (Samuel) and Carolyn Willey (Roger), 7 grandchildren, Michael Fidler, John and Benjamin Greene, TJ and Arias Howell, Haven and David Willey, 1 great grandson Jamie McCain, and her sister Arlene Herrmann. She was preceded in death by her three sons Robert, Douglass, and Roger Greene, great granddaughter Aryan McCain, her parents, and her sister Connie Hudson. Funeral services will be held at 11:00 a.m. on Friday, January 2nd 2015 at the LDS chapel at 4932 South 3200 West in Taylorsville, Utah. A viewing will be held at the church from 9:45 to 10:45 a.m. Interment will be at the Evergreen Cemetery in Springville, Utah.

The family of Linda Bird Greene created this Life Tributes page to make it easy to share your memories.