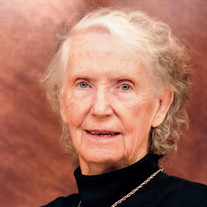 Linda Wariner, our dear mother, grandmother and great grandmother, left this life and returned to her sweetheart Cecil on June 5, 2019, at the age of 94. She is dear to our hearts and will be greatly missed. Sylvia Linda Lillywhite Wariner was born on December 7, 1924 in Bisbee, Arizona to Joseph Dyle Lillywhite and Pearl Melissa Brown Lillywhite. She was the third of four daughters. During her childhood years she lived in Arizona, Mexico and moved to Southern California when she was about eleven or twelve years old. She enjoyed activities in school and was a good student. She especially liked music and singing. She and her sisters learned to play the piano together as teenagers. She enjoyed cooking, sewing and gardening and loved to climb the hills with her friends and sisters. She met her sweetheart Cecil though church youth activities when they were young teenagers. They were married on September 4, 1941 and began their family shortly thereafter. Cecil served in the Navy during WWII while Linda was kept busy raising her family. Linda and Cecil were married for 75 years. She is the mother of seven children, five boys and two girls. They lived in Arizona and Southern California before they moved to Colorado where they spent most of the children’s growing up years. She was a devout member of The Church of Jesus Christ of Latter-Day Saints and served in many capacities throughout the years, including Relief Society President, Primary President and various music callings. She had a strong testimony and was dedicated to the Lord, her husband and children in their many endeavors. She was preceded in death by her beloved husband Cecil, mother Pearl Melissa and step father Will Blackburn; her sisters Lenore Lillywhite, Mae Cervantes, and Rosemarie Francis; her second son Kenneth (Sandy) Wariner, her grandsons Eric Wariner and David Wariner and great granddaughter Abigail Wariner. She is survived by her children Lynn (Idonna) Wariner, Bonnie (Kent) McKinnon, Bill (Gail) Wariner, Jim (Diane} Wariner, Emily (Tom) Holtey, and Andy (Teri) Wariner. She is also survived by thirty-three grandchildren and numerous great-grandchildren. Funeral services will be held on Monday, June 10, 2019 at the Greenleaf Ward Chapel of the Church of Jesus Christ of Latter-Day Saints located at 2160 W. Gordon Ave., Layton UT. A viewing will be held at 9:30 am prior to the funeral at that same location. Flowers may be sent to the church at 8:30 that morning. Interment will be at the Uintah town cemetery immediately following the service, 1504 E. 6400 S., Ogden UT

Linda Wariner, our dear mother, grandmother and great grandmother, left this life and returned to her sweetheart Cecil on June 5, 2019, at the age of 94. She is dear to our hearts and will be greatly missed. Sylvia Linda Lillywhite Wariner... View Obituary & Service Information

The family of Linda Wariner created this Life Tributes page to make it easy to share your memories.