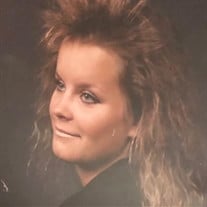 Born August 7th, 1970, in Salt Lake City, Utah, to the parents James Melton Miller and Debra Ann (Williams) Miller. Children, Devan Miller, Darnell Cockle, and Jalen Cockle. Siblings, Shawn (Trish) Miller, and Casey (Sacha) Miller. Married Darnell Cockle Sr. on July 30th, 2001. Divorced May of 2015. Lisa was the only beloved granddaughter for nineteen years, she was raised around all boys until her cousin Sable was born. As a young girl she loved pink, and her family always surrounded her in pink. She was a tenacious young girl, she was always loving and outgoing, and a member of The Church of Jesus Christ of Latter-day Saints. She worked for the Newspaper Agency Department of the Salt Lake Tribune for many years. In 1993 she began working for Southwest Airlines as an Agent, to later be promoted to an Admin Coordinator position. Due to health-related issues she retired from Southwest Airlines in 2007. In the Mid 80’s she fell in love with Shane Wilson, the two reunited several years ago. Lisa believed Shane was her soulmate. Lisa battled with health problems for seventeen years. She had a fight in her that kept her alive longer than many ever expected. Her desire to see her boys get married and have children was her driving force to continue fighting. Survived by her grandmother, Virginia Williams, mother, Debra, sons, Devan, Darnell, and Jalen, two brothers, Shawn and Casey, many aunts, uncles, nephews, nieces, and cousins. Proceeded in death by her grandfather Bill Williams, father James, uncles, Rick and Mark Williams. Services to be held on, Friday December 21st at the Cottonwood First Ward Chapel. 5913 South Highland Drive, Holladay, UT.

The family of Lisa Ann Miller created this Life Tributes page to make it easy to share your memories.