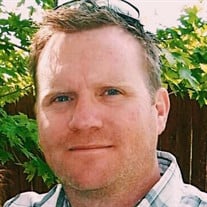 Logan Day Robertson 1976 - 2017 Logan Day Robertson, 40, Provo, Utah passed away in his sleep on August 21, 2017 at his home. Logan was born October 30, 1976 in Provo to Don Forest and Grace Divers Robertson and was the youngest of five children. Logan graduated from Timpview High School in 1994. He went on to serve a two year mission for the Church of Jesus Christ of Latter Day Saints in the New Hampshire/ Manchester mission returning home in 1999. Logan remained steadfast in his testimony and loved and relied on his Savior with all his heart. Logan completed his Emergency Medical Technician/Firefighter 1 and 2 Certification at the Utah Fire and Rescue Academy. He worked for Sundance Partners as a Resort Front Desk Supervisor and continued his employment with them for several years. Between 2004-2007 Logan was a volunteer Firefighter and EMT for the North Fork Fire Department shortly after leaving there he changed his career choice and accepted employment with Hewlett Packard in their logo maker division where he was the Customer Solutions Group Team Lead. In 2011 Logan made the decision to move to Livingston, Montana and accepted a Project Manager position with Printing for Less. Logan loved his time living in Montana especially since he could enjoy the freedom of riding his motorcycle on the highway surrounded by wide open spaces. One year following the death of his father, Logan returned to the family home in Provo continuing in various endeavors. Logan loved making movie shorts and script writing. He spent many months traveling to Moab making YouTube videos and spent countless hours writing scripts and working on storylines. His creative ideas for film were boundless and he had many stories that remain partially written. Fortunately some of his projects will live on through the internet and may be enjoyed by many. Logan had several close friends whom he loved working with on film ideas. He was a lover of the outdoors, he loved nature and animals and even a lonely chicken that wandered into the yard became his best friend. He was a collector and enjoyed buying an item and then changing its purpose into a unique object. Like his father he was a big country western fan and collected old vinyl records of all his favorites such as Johnny Cash and Willie Nelson. Logan never knew a stranger, he was kind to all and was known to give away his last few dollars to someone less fortunate than he. Through the years Logan has touched many lives and will be remembered with love and affection by many. Logan will be lovingly remembered by his mother Grace, his brothers and sisters, Suzanne Luebke (Christopher) Robert Bruce Robertson (Kyla) Casey Robertson and Amanda Robertson. He is survived by many nieces and nephews that he loved with all his heart and had special names for all of them. Also many extended family members in the USA and in Scotland along with good friends and neighbors that he loved dearly. Logan was preceded in death by his father Don Forest Robertson and his grandmother (Nana) Elizabeth Fraser. Funeral services will be held 11:00 am, Monday, August 28, 2017 at the Bonneville 13th Ward of the Church of Jesus Christ of Latter day Saints located at 1498 East 800 South Provo, Utah. Friends and family may call one hour prior to the service. Interment will be at the Provo City Cemetery, 610 South State Street, Provo, Utah.

Logan Day Robertson 1976 - 2017 Logan Day Robertson, 40, Provo, Utah passed away in his sleep on August 21, 2017 at his home. Logan was born October 30, 1976 in Provo to Don Forest and Grace Divers Robertson and was the youngest of five children.... View Obituary & Service Information

The family of Logan Day Robertson created this Life Tributes page to make it easy to share your memories.