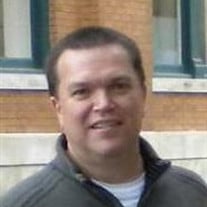 It is with broken hearts that we mourn the passing of Lonny Bruce Flygare of Orem, 46, after a valiant and courageous battle with cancer. Lonny was born on November 7, 1968, in Provo and died on Wednesday, December 24, 2014 also in Provo. He is the son of Lenard Bruce and Kathleen Sims Flygare of Orem. Lonny graduated from Orem High School and LDS Seminary in 1987. While at OHS he was the manager of the basketball team. He married Lisa Jasper on May 1, 1998 in the Mount Timpanogos Temple and together they built an amazing life. Lisa was his first love and his everything! Family was a close second and they attended pretty much everything they were invited to. He and Lisa loved to travel. Lonny also enjoyed watching all sports, playing golf, running, reading many types of books, watching videos and going to movies, plays and concerts. He was a BIG BYU and New York Yankees fan. He had a great sense of humor and loved to laugh. He was a fan of “take out” food and his favorite dish was lasagna. Lonny was a member of the Church of Jesus Christ of Latter-day Saints and faithfully fulfilled every church calling he had. His favorite church calling was Executive Secretary of the Cherry Hill 6th Ward. He returns to his Father in Heaven with Honor! Lonny is survived by Lisa, his wife of 16 years, parents, sisters Holly Gardner (Dave, Pocatello, ID), and Tami Flygare (Saratoga Springs), brother Brady Flygare (Brook, St. George) grandmother, LaRue H. Sims (Provo) and grandfather, John W. Flygare (Orem). He is also survived by in-laws Jerry and Beth Jasper (American Fork), sisters-in-law Diane Nielsen (Steven, Hingham, MS) and Amy Openshaw (Glen , Hanover, MS) and brothers-in-law, Mike Jasper (Tami, Orem) and David Jasper (Suzanne, American Fork). Many nieces, nephews and extended family survive him and he was so very proud of all of them! His dog Champ will be lost without him. Lonny was preceded in death by his Grandfather, Elmer Sims and his Grandmother, Flora H. Flygare. Funeral services will be held on Monday, December 29, 2014, 12:00 p.m. at the Cherry Hill 6th Ward Chapel, 1650 S. 200 E. in Orem, preceded by a viewing at 10:30 a.m. at the same chapel. There will also be a viewing on Sunday night, December 28, 2014 also at the Cherry Hill 6th Ward Chapel from 6-8:00 p.m. Lonny, you are our SUPERMAN and our HERO! We are extremely grateful for our knowledge of the Plan of Salvation and of the knowledge that FAMILIES ARE FOREVER . We will see and be with you again! You hated saying good-bye so we will instead say, “See you later!” WE LOVE YOU!

It is with broken hearts that we mourn the passing of Lonny Bruce Flygare of Orem, 46, after a valiant and courageous battle with cancer. Lonny was born on November 7, 1968, in Provo and died on Wednesday, December 24, 2014 also in Provo.... View Obituary & Service Information

The family of Lonny Bruce Flygare created this Life Tributes page to make it easy to share your memories.

It is with broken hearts that we mourn the passing of Lonny Bruce...