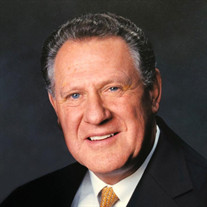 Loren Glenn Burton 1939-2020 Our beloved husband, father, grandfather, brother, and friend passed away at home in Holladay on Monday, November 16th surrounded by his family. He was born June 16,1939 in Ogden, Utah to Dale Shurtliff Burton and Belva Virginia Wilson, the fifth and final child with four older sisters. He was athletic from the start and performed with his sisters in a gymnastic troop. He once walked on his hands from baseline to baseline during the halftime of a Harlem Globetrotters basketball game at the tender age of 5. He considered himself a gym-rat, collecting towels and cleaning up in exchange for entrance into the YMCA. He served a mission for the Church of Jesus Christ of Latter-day Saints in the North Central States Mission. After his mission, he married his sweetheart, Annette Jean Laughlin, on June 22, 1962 in the Salt Lake Temple. They raised 8 children in the Holladay area. He graduated from Weber State College with an associate degree, and completed his bachelor, master and doctorate degrees at the University of Utah. He worked in the Granite School District as an educator, serving as a teacher, counselor, coach, principal and superintendent. Loren was never one to call attention to his accomplishments and to do so here would not be in keeping with his wishes, but to not mention a few would minimize his service and the tremendous influence he has had in the lives of others. He played on the Weber Wildcats Basketball Team that won the National Junior College Champions in 1958, he was inducted in the Weber University’s Hall of Fame with his teammates. He served as a bishop, stake presidency counselor, Public Affairs Director in Nauvoo, Illinois, Mission President in Naga Philippines, and humanitarian mission in Egypt. But these are not his greatest achievements nor would you ever hear him bring these items up for discussion. He was a humble man who exemplified C.S Lewis’s statement: “Do not imagine that if you meet a really humble man he will be what most people call humble nowadays. He will not be a sort of greasy, smarmy person, who is always telling you that he is nobody. Probably all that you will think about him is that he seemed a cheerful, intelligent chap who took a real interest in what you said to him. He will not be thinking about humility: he will not be thinking about himself at all.” This was Loren. His most cherished accomplishments were being true to our mother for 58 and a half years. He was a loving dedicated father, grandfather, brother and friend. He was a disciple of Christ who dedicated his life to His teachings. He loved the Lord and his fellowmen. He magnified his callings and performed his duties with excellence. He was a man of integrity. He was not one to be found being critical of others. He is survived by his loving wife Annette, eight children - Stephen (Nysje) Burton, Greg (Caroline) Burton, Lori Child (Roger), Brad (Lori) Burton, Jeanine Ruth (Mike), Rebecca Taylor (Mark), John (Missy) Burton, and Michael (Emily) Burton, 50 grandchildren, and 21 great grandchildren, three sisters - Alta Evans, Pat Biencourt, and Belva Hawks. He is preceded in death by his sister Virginia Cunningham. His legacy is the light and the love that he showed to others. His life was worn out in the service of others. At the end of his life he said, “I have everything,” referring to his faith, family and friends. For him, nothing else mattered.

Loren Glenn Burton 1939-2020 Our beloved husband, father, grandfather, brother, and friend passed away at home in Holladay on Monday, November 16th surrounded by his family. He was born June 16,1939 in Ogden, Utah to Dale Shurtliff Burton and... View Obituary & Service Information

The family of Loren Glenn Burton created this Life Tributes page to make it easy to share your memories.