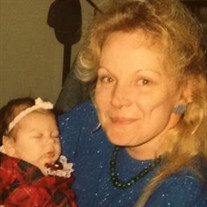 Early in the morning on Memorial Day May 28, 2018 Lori Zumwalt was taken into Our Heavenly Father’s arms during the night. She had been suffering from the effects of diabetes and lung problems. She was born to Valerie Joyce Coates and Kenneth Harvey Zumwalt on February 11, 1959 in Salt Lake City, Utah. Lori had the privilege of traveling throughout the U.S. as a truck driver and just for her sense of adventure on her Harley. She made many friends, memories and stories along the way. She married Pat Griffin when she was 16 years old, later divorced. She then met the love of her life, Danny Floyd Bauer “Snowflake” whom she never married but lived on and off with for over 33 years along with their several furry children, mostly dogs. They had many great times together as well as some rocky roads splitting up unfortunately before Danny passed away. They, together, were best known for dressing up and Santa and Mrs. Clause at several functions, as well as dressing up as clowns and creating the characters of “Sherriff Bubbles” and his sidekick “Boom- Boom.” They appeared for years in several parades around the valley winning trophies for best clowns. Lori was a very talented artist. She loved to create things and decorate her homes and apartments with them. She loved to paint, make sculpture dough Christmas ornaments, decorations for all of the holidays, crochet, knit, and macramé. She had a soft heart for all animals. Lori loved all children, especially her nieces and nephews, even though she couldn’t have any of her own. She was a very giving person even when she didn’t have much. She would go without an item in order to give it away and make someone else happy. If we could sum up her life in a few words it would be…”Life should not be a journey to the grave with the intention of arriving safely in an attractive and well preserved body, but rather to skid in sideways on a Harley, with a drink in one hand toasting to the world that I did it my way! My body thoroughly used up, totally worn out and screaming “whoo hoo, what a ride!” Lori is survived by two sisters: Lynne Lindsey and Lesa Downs , three nieces and two nephews, several grand nieces and nephews, cousins, aunts and uncles that she loved dearly. She is preceded in death by her parents, and Danny.

Early in the morning on Memorial Day May 28, 2018 Lori Zumwalt was taken into Our Heavenly Father&#8217;s arms during the night. She had been suffering from the effects of diabetes and lung problems. She was born to Valerie Joyce Coates and... View Obituary & Service Information

The family of Lori Zumwalt created this Life Tributes page to make it easy to share your memories.